David Orr: How the History of Democracy Can Help Us Invent a New One 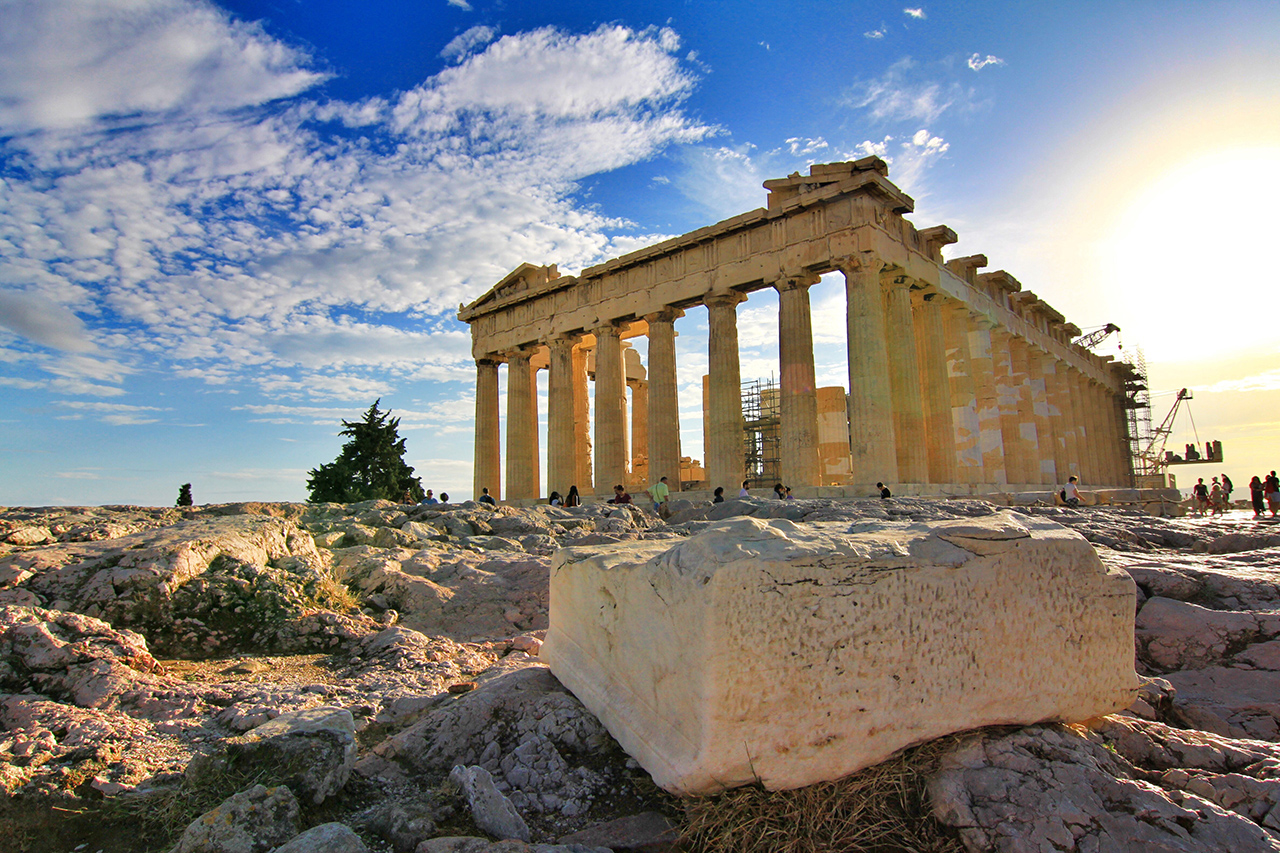 How do we fix a democracy that has strayed so far from the people it’s supposed to serve? Professor and author David Orr is calling on us, in this unique moment, to create a new one entirely.

Orr draws from the warnings of Greek philosophers and the descent of the Weimar Republic into Nazi Germany to understand the deficits of democracy today, and how we can fix them. He says that in order to create a government truly of the people, for the people, and by the people, we must reach across partisan divides and build a bridge above the abyss of fascism together.

Read more from David Orr in his recently released book, Democracy Unchained: How to Rebuild Government for the People.

Pronouns are interesting things, and they cause us to do lots of things we otherwise would not do. So when we say I and me and mine, that takes us to markets. That’s the side of us that is a consumer. If you say we, ours, and us, that takes you to a different area where we’re citizens, not just of the United States, but also of a biosphere, and a moralsphere. So for 40 years or longer, we’ve had a war waged against ours and us and we, a war waged against government.

This is the most massive political failure in history. We call it climate change or climate destabilization, but it is chaos in any word. So I want to connect that to a political failure, this failure to do the public business in a way that was transparent and open and competent.

We had the first warning given to a US president about climate change. It was given in 1965. That’s a long time ago. We knew enough in 1965 to develop a day jury, a climate policy binding in law.

Now, here’s the origin of the idea. Lost in the mists of time, we don’t know exactly where the idea of democracy started, probably around campfires in tribal cultures, but in the Western world it started in the agora, the Greek forum below the Parthenon. This is where Socrates and others debated the ideas of democracy, and it wasn’t always pretty. Democracy seldom is. But what they did was to wager a bet that enough people, enough of the time, would know enough and care enough to conduct a public business in a way that was responsible.

And then there was a second proposition that people matter, and that our rights count. As Jefferson put it, unalienable rights that we have to life and certain things that guarantee our dignity and our way in the world. And that we, as people with those rights, should have a say in how we’re governed and by whom. That was the bet.

Did it work? Well, Thucydides wrote here about why it didn’t work in Greece in the Peloponnesian Wars. It falls apart. This is famous classic history. And John Adams, one of the founding fathers, as we call them, said that democracies die by committing suicide, seldom by outside intervention. Read the daily papers.

The next case I want to bring up here is this, the question here is: How did the democracy of the Weimar Republic after World War I, with Goethe and Schilling and great German philosophers, become the world of Hitler and Himmler and Auschwitz? And so how did these people, the most educated people on Earth, fall for Hitler? How did this occur, and what are the lessons we could draw from that in our own life?

Now, my second point: Is the US a democracy?

This was observed in one of the great studies of American democracy by two of the best political scientists. They say that your opinion and mine don’t really matter much. Think of this as the Grand Canyon, a chasm, and on this side there’s us and our public opinion, and on the other side there are laws and regulations and so forth. The bridge that ought to connect what we want as people and the policies that we get is broken, or it’s been turned into a toll bridge.

We favor things like healthcare, climate action, and so forth. But what passes Congress? A $1.4 trillion tax cut for people who really don’t need it. So we don’t get what we want, and democracy is broken.

Is democracy dying? The scholars, the people who study this for a living, believe it is — or at least it’s impaired. Economist magazine lists the United States as an impaired democracy and going south. A poll from the World Values survey shows that virtually in every country, support for democracy is declining. And it would say the same thing for any age group — for the elderly, the middle class, young people — that democracy is failing.

Now part of this goes back to that pronoun issue — I, me, and mine. Political change is where we come together and we say, This is our country, it’s our democracy, it’s our policies, and they do matter.

I grew up near Youngstown, Ohio. Youngstown in 1941 was the wealthiest city per capita in the county. If you go there now, it looks like it was bombed down in World War II. This is very typical of the Rust Belt region. It’s not shiny like a lot of California is. It’s rusted out, burned down, disinvested. We now fly over cities like Detroit, Cleveland, Toledo, and Youngstown, Ohio. So if you wonder why there was support for Donald Trump in the last election, a lot of it is found in the failures that we’ve pursued.

As Youngstown was declining, so too were the prospects of each generation. The odds of young people earning as much or more than their parents by 10-year periods is going down. So if you’re a young person in Youngstown or in that Rust Belt, or in a lot of the areas in the United States we mark as a red zone, you don’t see a future that your parents saw. We’ve got to find ways to reach into that red zone, and reach out across these chasms.

But there’s this problem, which we thought we had solved at one time. When Barack Obama was elected president, I assumed we’re going to win; we finally have crossed that threshold into acceptance and diversity. But we found it was a little premature. The Southern Poverty Law Center tracks hate groups all across the United States. They’re well armed and they’re not quite with us yet. This is a problem of income. If you want to know why democracy collapses, go back into history: Plato and Aristotle said it collapses because of oligarchy. Democracy becomes an oligarch world ruled by the rich people. And this is what’s happening to the working people, living paycheck by paycheck especially in Ohio or the Rust Belt states, who are losing ground.

The question is: So what? Why don’t we just become an epistocracy and rule by expertise? Why don’t we do what China is doing: surveillance democracy and imprison dissenters? Democracy really doesn’t work, and again, it does seem to commit suicide fairly often. Let me give three reasons why we have to defend democracy, and this is where we’ve got to come together as citizens to understand how we conduct the public business in ways that’s fair and decent and sustainable.

Jim Hansen, the most famous climate scientist in the world, says that you can’t fix climate until you fix democracy. And that’s really inconvenient because we don’t have much time to fix climate. So why do we have to fix democracy? This is going to be an all-hands-on-deck time for us. All of us have got to be engaged. So organic farmers and permaculturists, business people, educators… we’ve got to come together, and we can only do that if our votes matter, if our policies are supported, if we can bridge that gap from this side to that side.

Democracy may be, as Winston Churchill once said, the worst form of government, except for all the others that have ever been tried. But even in its imperfections, it’s the only system of government that says you and I matter.

So what do we do? I want to issue a caution here. I don’t think we ought to be directed solely at Donald Trump, because what he did was to highlight everything that was wrong and had to be fixed. He essentially took a highlighter to everything that we need to undo and redo and rethink.

We don’t need to repair democracy so much as we need to invent the first ever democracy, true democracy.

So this gets personal. After the election of 2016, I went into a deep depression, and I was ready to retire and go off and do what old white guys do: play golf, bowl, things like that. Neither of which I do well. Or with any particular joy. So what we did was to organize a conference. It was like looking through the rearview mirror and thinking: how did we get to the election of 2016?

We had all these gatherings in a new hotel we built as an entirely solar powered, platinum building. We put these wonderful speakers on the stage, and asked each to explain how they would repair liberalism or conservatism. And you know what? The conversation was civil, funny, productive, creative. Imagine that in American politics. It can happen.

Reverend William Barber was like an exclamation mark at the end of the event. When you come to think of what ails us, it may be economics, may be technology, climate change certainly has both of those elements to it, but it’s moral. And William Barber pointed out that this is a moral failure before it’s anything else, before it’s even a political failure.

So the next part of this was pulling together 34 authors and assembling a book: Democracy Unchained. We took Nancy MacLean’s book, Democracy in Chains, and inverted the title. She’s on our advisory board, by the way. And the book comes out in mid-February of 2020.

We’re following that with events. The opening event with authors and others will be at the National Cathedral on March 25th of 2020. Then we do events in Boston, Philadelphia, Cleveland, Denver, Los Angeles, San Francisco. What we want to do is start a conversation about how we rebuild American democracy. As you’re bringing this democracy into an emergency room, you’d stop the bleeding and stabilize the vital signs first, then you get to lifestyle changes. But the long-term conversation we must have is this: how do we build a democracy in which all of us do, in fact, matter?

So part of this is trying to restructure government, starting with the words that we use. Let’s reclaim our public language. How did the word conservative become what it has become? Or how did the word liberal become so disparaged? Those are flip sides of the same coin. Everybody in this room, on one issue or another, you’re conservative or liberal, but you’re both. It’s called a thinking person, not a ditto-head.

We need to think through how hard this is going to be, and think of the heroes and heroines in this room, people who have sacrificed and who have risked a great deal. That’s all of you. We’re going to all have to risk, we’re all going to have to sacrifice something to make this dream come true.

Imagine only a government of, by, and for the people in which we have no malice toward anyone, but charity for all.