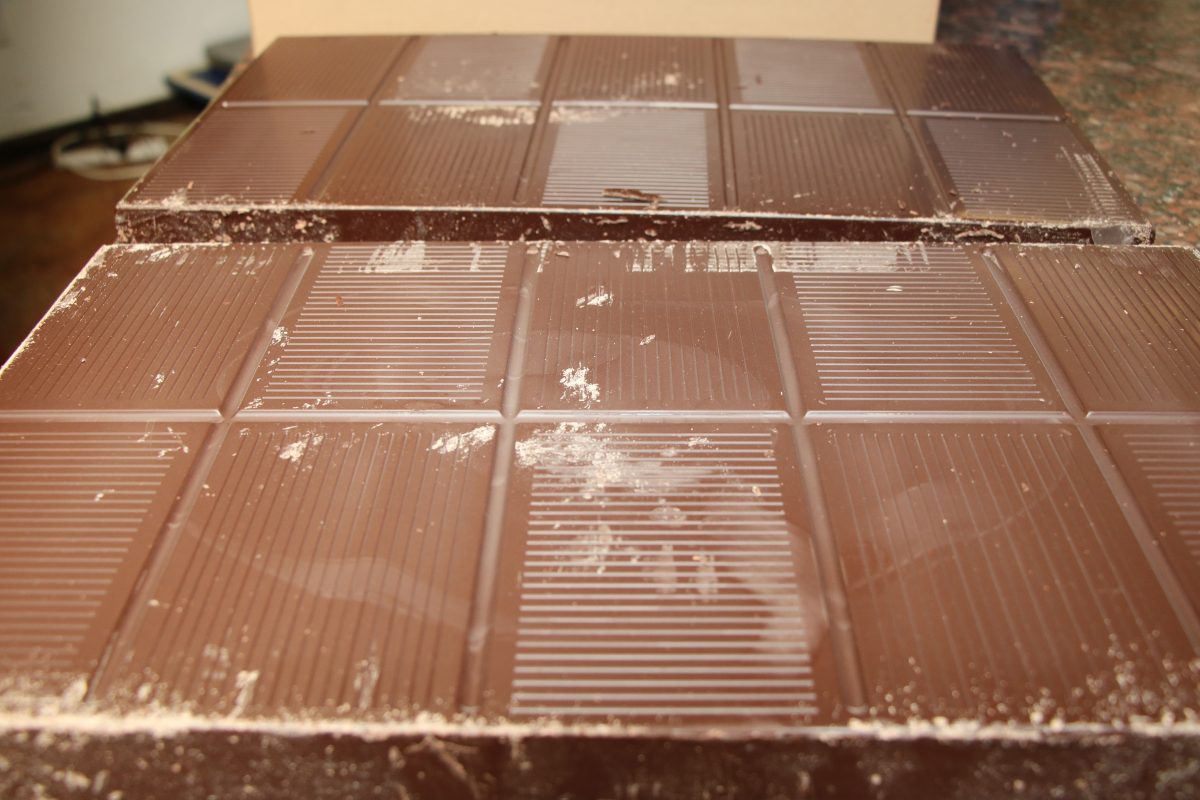 Top photo: Chocolate beans grown in Latin America are processed in Belgium into large blocks that are sent to Canada to be melted, tempered and have ingredients added by Denman Island Chocolate

Denman Island Chocolate, started in 1998, was the first organic chocolate company in Canada. It is located in a beautiful non-commercial spot on a wooded ridge on Denman Island, British Columbia, with views of the Strait of Georgia. Co-founder Daniel Terry placed a conservation covenant on the property when he bought it to restrict logging and other activities that would degrade the ecosystem. The company produces 10 flavored products – with ingredients  like ginger, hazelnut, orange, raspberries, espresso, even the Mexican spice chipotle – to ship across Canada. All ingredients are organic, and the chocolate and coffee are also Fair Trade.

Arty Mangan, Bioneers Restorative Food Systems Director, visited the custom home combination chocolate factory and spoke with Daniel about his business and how he uses it to support environmental causes.

Arty: This is not your typical factory setting.

Daniel: We were mindful of the fact that we are right in the natural interface and wanted to build something that would be beautiful and honor this place. There is no distance between us and the natural world here.

With our aesthetic, we needed a beautiful building to make a beautiful product in. I feel that’s so important. We’ve got happy employees. We’re experiencing beauty and goodness all day. Of course, that’s going to go into your chocolate.

Arty: What went into your thinking when you decided to use organic and Fair Trade ingredients?

Daniel: In the tropics, where chocolate is grown, the classic way of farming is to burn everything and then plant a couple of generations of crops. Then, when you’ve depleted the soil you move on to different land. You can’t do that with organic agriculture. It’s not permitted. They make sure that the local ecosystem remains as intact as possible.

Fair Trade is a little more complicated. With organic ,Canada and the U.S. have organic standards. There are different certifiers that work to those standards. There’s not one blanket standard for Fair Trade. There’s Trans Fair and FLO (Fair Trade Labelers Organizations International) and they all do different things. A lot of brands have in-house certification that they do themselves, which may or may not be trustworthy.

The problem with Fair Trade as a certification is that it’s extremely top heavy in terms of where the money goes. Yes, there’s a guaranteed amount that growers get. That’s really important. But bureaucracy consumes a huge amount of the money.  We use all licensed Fair Trade products, but we don’t put the logo on our product because we haven’t licensed ourselves with them. There is an additional cost to put that sticker on. But we are still benefitting the growers because we’re buying ingredients at Fair Trade prices.

Arty: What about labor issues?

Daniel: Child slavery is an issue in some places. I visited organic plantations in the Dominican Republic and Brazil that are Fair Trade. In the Dominican Republic, there were kids working there, but they were the kids of the farmers. They’re going to school. They’ve got everything they need. But If we are talking about trying to create economic equity, I ask the question, as a Canadian, would I be happy with that standard of living. That really hasn’t been looked at. But Fair trade does try to help people earn a decent living in relation to the economic standards of their country.

Chocolate was originally part of a triangular trade between Africa, the New World, and Europe. Slaves went to the New World, cacao went to Europe, guns went to Africa. So, we’re kind of making some redress in terms of that historical crime, but there’s still the North/South division.

Organic is the thing that drives me even more than Fair Trade because I know that growers receive a premium right off the bat from organic. And they’re not poisoning themselves or their kids or their employees walking by the side of the field with herbicide sprayers. I think that’s so important.

Arty: Environmental issues are important considerations in the design and implementation of your business. Why is that important to you? How does that fit into your vision of the business?

Daniel: It fits into my vision of business period. Any business should have a social mandate. Of course, that doesn’t always happen, particularly when you’ve got a company that’s publicly traded where their responsibility is to make money for the shareholders.

We donate at least 1% every year of our gross. It’s selfish, really. It’s a way for me to feel good about running this business and making positive change. We focus on conservation and environment groups.

One of the early campaigns we supported was a Dogwood Initiative. That was back in the day when the Enbridge pipeline [a proposed pipeline from the Alberta tar sands through the Great Bear Rainforest in BC, one of the most pristine temperate rainforests in the world] first raised its ugly head. And it seemed like it was going to happen. Dogwood had a campaign: Tankers are Loony [loonie is the name used for the Canadian one dollar coin that has an image of a loon]. They made decals, the idea was that you put one on a Loonie and it looked like the loon has been oiled in a slick. We made a significant donation to that campaign and they sent us 10,000 of those stickers. We put them in 10,000 Simply Dark bars and sent them across the country. That was really interesting because some people said, “I will never buy your chocolate again.”

Arty:  Why, because they didn’t agree with the campaign?

Daniel: It wasn’t even about not agreeing with the campaign. It was the notion that a business would promote something that’s outside of its purview.  But I feel it’s my responsibility.

I remember a radio interview I did when we were involved with the Pull Together campaign. I was asked if  I thought I had a right as a business person to be involved in these campaigns.

My feeling is, if you don’t agree with the business owner, you’re free not to buy their product. Right? I admire people for putting themselves out there and saying, “This is important to me.” Because what it means is you’re not just trying to make money. It’s much more of a holistic way of doing business. For us, again from a selfish point of view, we’ve made these tremendous connections with people from Dogwood, people from Sierra Club B.C., Raincoast and currently with Georgia Strait Alliance.

With Pacific Wild, we donated to them and we were their guests on a 10-day trip on a boat in the Great Bear Rainforest. We did a similar thing with Raincoast. That was a way for me of cementing the importance of those campaigns in my mind, because down here it’s possible to just kind of see things through a screen, if you like, and to not really understand the importance of all those issues.

I want to behave as if my efforts are going to make a difference, as if that difference is going to be enough to push things in the right direction. Even to have this conversation about these sorts of things is important, individually and with my customers. The one thing we have as human beings is the ability to make a choice. We may not make the right choice, but if our choice is just to ignore all the shit that’s going down, we’ve lost. As human beings, we’re useless. So, it’s important to try.

Arty: How have these campaigns affected your customers?

Daniel: We did a campaign with Raincoast and made a product called the Grizzly Bar. We donated and sponsored a prize that was a week on the Raincoast vessel, the Achiever, up in the Great Bear Rainforest. An unbelievable trip.

Matt, the guy who won, couldn’t go that year. The following year he booked the entire boat for him and a bunch of friends. Since then he’s done a bunch of fundraising efforts in Ottawa. So, there’s that fractal thing that happens, which I love.

All photos by Jan Mangan