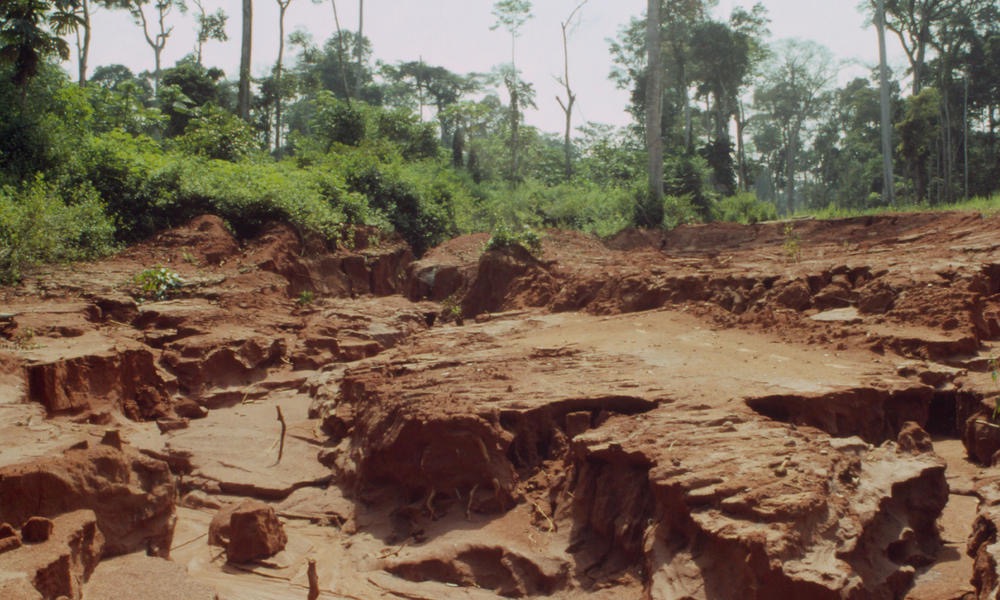 Dale Strickler, a Kansas farmer and agronomist for Green Cover Seed, the nation’s leading cover crop seed company, is a leader in the soil health movement and the author of “The Drought Resilient Farm” and “Managing Pasture.” Strickler was interviewed by Arty Mangan, Director, Restorative Food Systems at Bioneers.

DALE STRICKLER: I’m a farmer, and it’s our nature to complain because things are never right. When it rains too much, we’re complaining. If it rains too little, we’re complaining. We’re either getting too much or too little, but healthy soil lets water infiltrate into the ground where we want it and holds onto it longer. Healthy soil increases infiltration and eliminates runoff, so we get fewer floods and fewer droughts, and that eliminates a lot of our problems. We don’t have mud; we don’t have dust. We have moist soil. More days of moist soil make farmers’ lives easier.

ARTY: What are some of the ways to create drought resilient soils?

DALE: The number one soil health principle is to stop tillage. Tillage is the worst thing you can do to soil, other than to cover it with concrete. Tillage destroys soil structure. It oxidizes soil organic matter. It is the exact opposite of the direction we want to go in.

Number two, we need to protect the soil with a covering of plant residue. It’s important, for a lot of reasons, to retain residue on the soil surface. It absorbs raindrop impact to increase infiltration. It also keeps the soil cool. The temperature of bare soil can rise high enough to kill beneficial soil microbial life. We want soils that are full of life because diverse soil lifeforms perform essential functions. By keeping the soil covered so those micro-organisms don’t bake and dry out, water will infiltrate better.

We used to think that organic matter came primarily from the decay of aboveground residue, but, actually, it primarily comes from microbes that live on root exudates, the sugary substances that roots put out into the rhizosphere to nourish the microbes that perform essential functions for plants. The larger the microbial population, the more soil organic matter you get, and the more soil structure you get, the better everything works.

Another factor is that we want to have the root exudates produced as many days of the year as possible. We used to manage farmland by leaving some fields fallow. The thinking was that you don’t grow anything for a period of time to store moisture for the next crop. We thought we were letting the ground rest to build up moisture. What we’ve discovered since is that we weren’t letting the ground rest, we were letting it starve because we deprived all those essential microbes of the exudates that they need to survive.

The industrialization of agriculture has segregated our cropping from our livestock. We’ve moved them apart and put livestock into buildings and crops behind fences to keep livestock out. Natural ecosystems have animals  integrated into those systems. You won’t find any natural ecosystem in which animals don’t play a key role in maintaining the system. Microbes need an environment that is warm, moist, and protected from ultraviolet light, something that doesn’t occur naturally on the soil surface. That generally only happens because of animals. If I could, I would invent a machine that would take plant residue – dried leaves low in protein and green material high in protein – and mash it all up, grind it, moisten it, inoculate it with microbes, keep it warm, protect it from ultraviolet light for about 48 hours and then deposit it on the soil surface. And while we’re dreaming, how about making it solar powered and making it so that it replaces itself at the end of its life cycle?  And, at the end of its life cycle, we could break it down into edible parts that are delicious and nutritious. Actually, such a thing exists already. We call it a cow. Animals function in the ecosystem as the recyclers of above ground biomass: they convert plant residue into nature’s perfect soil improvement medium—manure.

Those are the principles for creating a healthy soil.

ARTY: How does carbon in soil affect water?

DALE: In multiple ways. In order to rehydrate your landscape, job number one is infiltration. When rain hits the soil, it needs to enter into the soil instead of running off, and the soil needs to be able to hold the moisture, and you have to have conditions in which plants can extract the moisture.

How does soil carbon affect that? It’s primarily through soil aggregation that you get infiltration. You get infiltration through pore spaces. Soils without organic matter (organic matter is about 50% carbon) are basically just sand, silt, and clay. Without any sort of organic matter input, soil turns into a compacted hard soil, a concrete like substance. In fact, we make buildings out of soils like that. It’s called adobe. Adobe sheds water. It is basically free of biology.

Soil biology creates aggregates which are soil particles bound together in clumps or little balls. In between all the little balls, there are pore spaces. Those are passages for water to enter the soil. The organic matter will hold as much as 400 times its weight in water depending on what form it’s in. That’s the water holding capacity of the soil.

Finally, we need to be able to get the water out of the soil, and that’s done with plant roots. Roots will only go as deep as they have oxygen penetration into the soil. When you have soil aggregation, which is dependent on carbon, not only is it a passage for water to enter the soil, but it’s also a passage for oxygen to enter the soil. If you have oxygen penetrating the soil, roots can go deeper and deeper. Obviously, the deeper the depth of the root, the deeper in the soil the plants can extract water, and the longer they can continue to grow between rainfall events.

ARTY: What role do mycorrhizal fungi play in the soil?

DALE: Mycorrhizal fungi are naturally occurring organisms found in our native ecosystems. The reason we don’t have mycorrhizal fungi in many places is, again, because of our tillage and fallow practices. Mycorrhizal fungi are obligate symbionts. They have to have a living root as a host. Fallow periods starve mycorrhizal fungi. Part of that hyphae of the mycorrhiza is on that plant root and the rest extends out. There are species that have been documented to have hyphae lengths up to 100 meters long, but most of them are about half-a-meter or about 19 inches in length. They bring water and nutrients back to the plants, sort of like an outsourcing of the root function. It expands the root zone.

The second thing that mycorrhizal fungi do is as their hyphae move throughout the soil, they exude a sticky compound called glomalin, which is the most powerful soil aggregating agent known. So, they build stable aggregates that allow water and oxygen to infiltrate better, so you can get deeper roots. Not only do the mycorrhizal fungi help the roots get water, but they can help the roots  grow deeper and  allow more rain to enter the soil. Mycorrhizal fungi are paramount. Of all the micro-organisms lacking in our agricultural soils, mycorrhizal fungi are number one. They’re the platform that all other rhizosphere organisms depend on.

ARTY: Do you recommend inoculating with mycorrhizal fungi?

DALE: I do. There are two schools of thought on this question. One is “the field of dreams” idea: build it and they will come: that is, if you create the proper conditions those fungi will show up. But mycorrhizal fungal spores don’t move in the soil. In many agricultural soils, they are at such low levels that it takes a long, long time to build them back. So, I do advocate inoculating. It’s not a perfect system. You will never inoculate your way to soil health, but if you put all the soil health principles together and combine that with an inoculation, then it can be very beneficial. I’ve seen good results from it. I do it personally on my own farm.

ARTY:  Industrial farming practices are causing topsoil erosion at alarming rates. The UN Food and Agriculture Organization warns that at current rates, we could run out of topsoil in 60 years.

DALE: Obviously, you can’t have soil that’s improving if the soil is leaving your property. If it’s ending up in streams and going from the Midwest down to the Gulf of Mexico or from California farms into the Pacific Ocean, that soil does you no good. You have to keep the soil intact in the place where it is. Preventing soil erosion is paramount. The main causes of soil erosion are, again, tillage and fallow practices. We’ve spent thousands of years trying to prevent soil erosion through really expensive methods. We’ve tried to construct big structures to prevent erosion, but, in fact, it’s really simple to control erosion — keep the ground covered and don’t till.  It’s that simple.

Cover crops are a fantastic way of protecting the soil and increasing the duration of root exudates in the ground. You can accomplish so many things by just having green plants growing all the time. Whatever your soil problem is, there’s a plant that can fix it. If you look at natural ecosystems, there’s no ecosystem, other than Antarctica, that doesn’t have green growing plants. There’s a plant that’s suited to dry soil, poorly drained soil, salty soil. For every soil condition, there is a plant that will grow in that situation.