Erik Ohlsen: A Life in Permaculture, Rooted in Bioneers 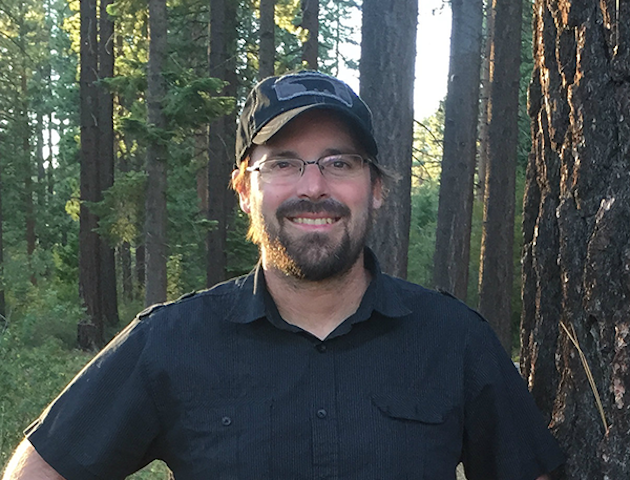 This is the first installment of Bioneers Restorative Food Systems Director Arty Mangan’s Q&A with longtime Bioneers community member Erik Ohlsen. To learn more about Erik’s work and approach to permaculture and activism, check out the links to other posts in the series below.


What was your first encounter with Bioneers?

When I was 20, I went to Bioneers for my first time. It was a new experience for me being around so many change-makers operating at such a powerful and high level. I already had a couple years of doing activist work and building community gardens and seed saving programs in my own community, and I was just starting to learn about what was going on in the world, where the challenge is for the health of the planet and communities, and in many ways feeling a lot of grief around what I started to understand were the evolving catastrophes on the planet. When I went to Bioneers that first time, it was a huge ray of hope to listen to speakers who not only were intelligent and thought-provoking and had done amazing stuff, but the scale at which they were working with government and corporations and communities that were the hardest hit and having success. I wanted to be like them. I want to aspire to work like that because that gives me hope and that’s the work in the world that’s going to make a difference.

I was also struck by the quality of the participants, not just the speakers. It felt like at every turn I was meeting somebody, even young people, who were engaged in their college campuses or in their communities, and it felt like almost everyone that I met was part of this community of Earth healers and activators, and I just felt so honored to be in their presence, so much so that I committed myself to going to Bioneers every year after that.

Each time I went, it was this moment of the year where I could share what I was working on and get feedback. Every time, and still today, I open myself up to the kind of mentors or collaborators I may meet there. Some of the relationships have been absolutely amazing.

I remember one talk that John Todd gave that has stuck with me forever. He described a multi-stacked enterprise model. I don’t remember all the details, but it was like the waste from a restaurant or brewery going to a permaculture system in turn that was selling compost to a farm that in turn was growing food that provided produce for restaurants. I was looking at these close-looped systems between diverse sets of communities and businesses. It really excited me to see how we could create economies that are regionally based and put together in relationship to each other in a symbiotic way, like how we design our garden to create jobs and provide this amazing regenerative work on the planet.

At your first Bioneers you met Julia Butterfly Hill, the heroic activist who spent over two years in the canopy of an ancient redwood tree protesting the logging of old growth forests.

Being a young activist, a lot of things come up — sometimes feeling a little alone, like we’re not acknowledged. You want to be in a relationship with folks who are doing these amazing things, but you don’t know how to access them. Often there’s a feeling of ageism, like people don’t take you seriously as a young activist, and that can be a real challenge for gaining momentum.

When Julia Butterfly helped launch the Youth Bioneers movement, I felt acknowledged as a young activist, that we do have something to offer, that we have the potential to create change. I was so honored by Julia because my entrance into activism and regenerative stewardship of the planet actually started with the Headwaters Forest battle. That was the first organized protest I ever went to, and that was the beginning of my opening into what was happening on the planet.

I’d often hear Julia’s voice when I’d go to a festival or on the radio, and I felt so inspired by the work she was doing, the message that she had, which ultimately was a message of love. Being able to engage with her at Bioneers, I was just so inspired by her work and turned on by what she was doing and the fact that she was looking to the youth as the up-and-coming generation to take on these endeavors. I felt really honored to be in that circle and to feel like youth activists have a role to play. We don’t always have to fight for or beg to be acknowledged and invited. It really felt like an invitation and an affirmation for me that I was on a good path for myself, a path that would lead somewhere, and that folks would take notice of the work we were doing.

Are there any other influences on your work?

Listening to Catherine Sneed speak off the plenary stage one year was in some ways a life-changing moment for me. She was talking about creating gardens in prisons in the Bay Area, and not only the therapy and rehabilitation benefits that had for incarcerated folks, but also that they were gaining access to quality food and learning a skill that they could use when they got out of prison to develop a career path for themselves, to connect to the Earth.

After hearing that talk I was in tears. It helped bridge two worlds for me that I was always as a young activist trying to bridge. For a while there I didn’t feel like there were enough folks talking about the need to bridge social justice movements with ecological regeneration movements.

In my early 20s, I really saw these two worlds operating parallel to each other and not integrating and weaving and creating a more holistic view the world, which includes social justice and battles for equality, along with regenerating the planet. So when Catherine shared the work she was doing in prisons, it was like, “Yes! This is what I feel in my heart needs to happen.” Finally, people were starting to have that conversation. They had already created programs and implemented them with success. So that really opened me up.

That’s something that Bioneers does so well that I don’t find in other conferences and events — the honoring of the need to care for people and communities, and the need to care for the planet, and how those two really can’t be separated. It really helped shape my view of the world and my view of solutions that are available to us right now that we can implement.