A Review of “Food from The Radical Center: Healing Our Land and Our Communities” 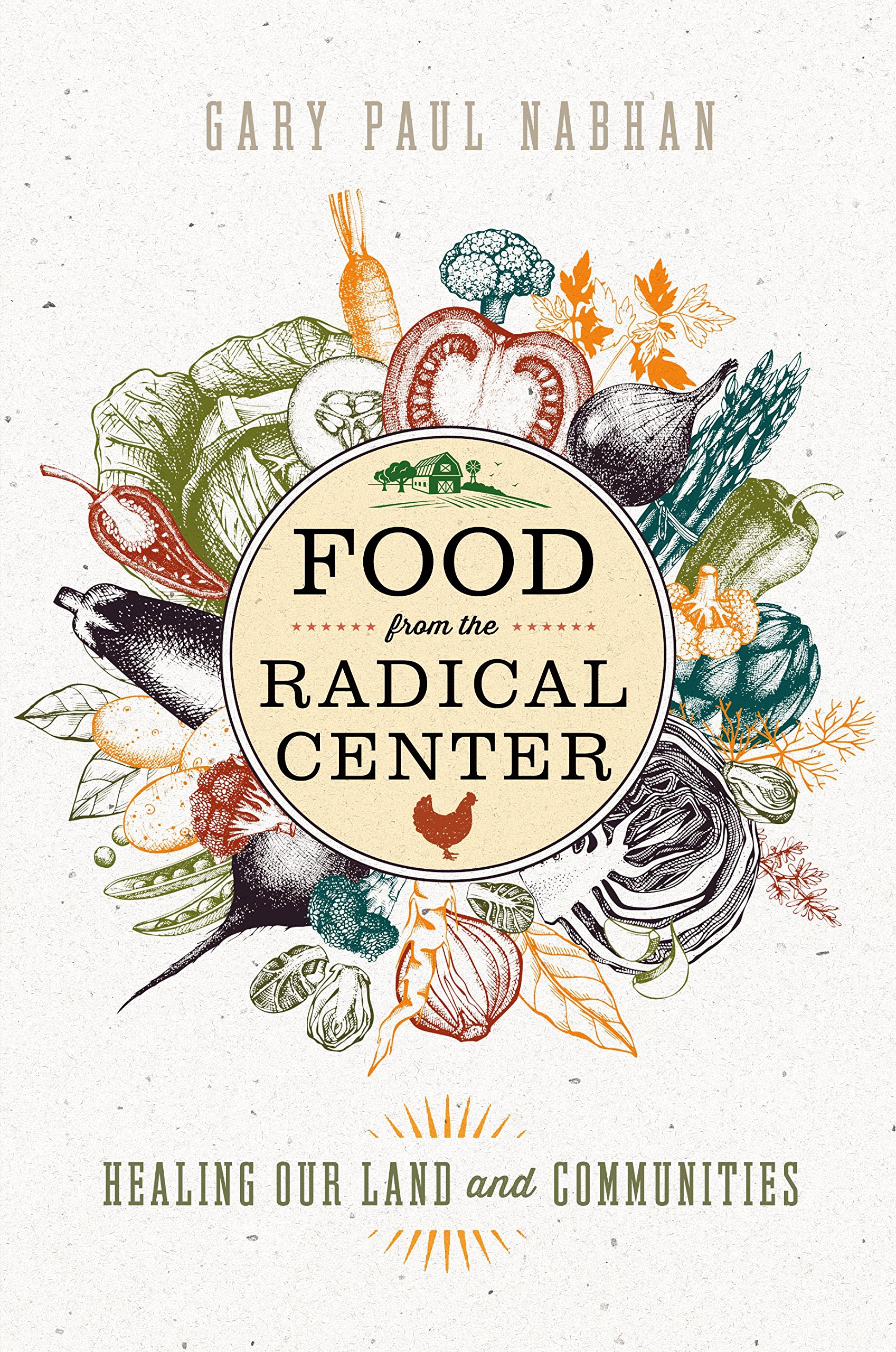 “Have you ever stumbled into a place where you were bowled over by an abundance of wildlife?” So begins the chapter Bringing Back the Bison in Gary Paul Nabhan’s latest book: Food from the Radical Center: Healing our Land and Communities (Island Press, 2019).

The question brought to mind a time in 2013 when there was an unexpected spike in anchovies in the Monterey Bay and massive schools were swimming by the mouth of the Santa Cruz Harbor. There were dozens of sea lions in formation, diving down to grab a mouthful of anchovies and coming up for air over and over again while hundreds of pelicans were dropping from the sky with seagulls in hot pursuit trying to steal some of the small, iridescent, nutrient-dense fish that overflowed from the pelican’s pouch. I was spellbound and felt genuinely renewed at what Gary Nabhan calls the “lure of life.”

Nabhan begins each chapter with a “Have you ever” question that leads to an experience full of appreciation for the diversity of the natural world and how it contributes to human culture and sustenance. Through these inquiries, he introduces the reader to people who are stewarding urban gardens in Querétaro, Mexico; Bison stocks on the plains and woodlands of North America; Atlantic sturgeon in the Delaware River; Navajo churro sheep;  rare fruit in Phoenix, AZ and California, and many more stories. These efforts are not just about salvaging a single species on its way to extinction – as important as that is – they are also about revitalizing the culture, economics, ecosystems and communities that these plants and animals have had, and can still have, a prominent role in.

In the face of intractable societal schism, Nabhan makes larger points to help bridge the divide that obstructs progress in conservation. He first names what is painfully obvious, “Americans appear to be at war with one another rather that at work with one another.”

But where most people see division and isolation in today’s acrimonious political and social environment, he sees community and cooperation. “We must be willing to take a step toward consensus, even when it means risking criticisms from mud-slingers on the far extremes. This fertile ground is what rancher Bill McDonald began to refer to in the mid 1990’s as the radical center.” A concept that Courtney White successfully applied as an organizing principle to ameliorate antipathy between ranchers and environmentalists in the Southwest when he founded the Quivera Coalition to create a framework for productive collaboration.

Nabhan cites another systemic problem – the failed top down approach that has driven much environmental policy. Science, rather than ignoring culture, should respect and consider it when designing solutions. Studies have found that plans that are imposed without community participation or that don’t build community capacity to solve problems and resolve conflict, fail. Resource protection programs that don’t develop understanding and caring within the affected communities tend to be abused.

The remedy that Nabhan provides multiple examples of is practical grassroots community engagement – the inclusion of diverse and even conflicting factions to find common ground and solve serious local problems.

At one time 25 to 30 million bison, a keystone species that sustained the biodiversity and fertility of prairie grassland ecosystems and were a major food source for indigenous communities, roamed the North American plains and woodlands. Bison were nearly eradicated in a matter of decades reduced to, as wildlife historian Dale Lott said, “a carpet of whitening bones and a few hundred scattered survivors.”

It’s hard to overstate the role bison played in developing the grasslands, with assistance from Native American fire management practices that stimulated the growth of fresh forage, into some of the most fertile topsoil in the world, an asset that Midwestern farmers have been exploiting ever since. Buffalo wallows started as temporary shallow pools that were sealed by bison hair and oils when bison drank and bathed in them turning them into larger more permanent watering holes that support a variety of wildlife. Tragically, bison were brought to the brink of extinction by habitat loss, government policy and the industrial scale massacre that brought the population to less than 100 by the late 1880’s.

In the 1990’s, the InterTribal Buffalo Council of 58 tribes were managing over 15,000 bison, Nabhan writes, “in ways that nourish their culture and spirits as well as the ecology and economy of the region.”

Hugh Fitzsimmons, of Shape Ranch near Carizo Springs, Texas, who wanted to develop a free-range herd of bison on private lands, attended the Intertribal Buffalo Council. As a non-Native, he was not sure that he would be welcome, but he ultimately made friends and connected with Native American mentors who have taught him everything he knows about raising bison and with whom he now exchanges breeds. Hugh has a vision to increase bison herds in Texas to restore degraded ecosystems and regenerate deep-rooted native grasses to make the region more drought resilient.

Kent Redford of the Wildlife Conservation Society organized multicultural gatherings to listen to the priorities of Native American bison managers and to ensure their voices were a major part of the vision for bison recovery and prairie restoration of the Great Plains. Through these kinds of efforts, bison have rebounded to a population of 450,000 across the three nations of North America. Most of that work has happened on private and tribal lands.

The successful recovery of such an iconic species whose presence shaped the rich ecology of the Great Plains and the culture of Native people has, as Nabhan points out, a wider implication than the increasing numbers indicate. “The sense of place matters. That open space matters, that free ranging game matter, and that access to untrammeled land for recreational or spiritual rejuvenation matter.”

Revival of an Ancient Fish

Another example of community driven conservation involves an endangered anadromous fish that can grow to 16 feet long and weigh up to 800 pounds. Atlantic sturgeon have been on Earth as a species for around for 70 million years. Millions of Atlantic sturgeon once inhabited the Delaware River, now one of the most contaminated waterways on the Eastern Seaboard. This bony-ridged fish, one of the largest and longest lived in North America, was once a key part of Native American diets – tens of thousands of pounds were harvested a month. But by the late 1800’s industrial fishing practices using gill nets to sell the sturgeon as pet food, fertilizer, caviar, bait and oil depleted the stocks to about 180,000. In modern times the numbers crashed even further, with only a few hundred remaining in the Delaware River watershed.

Since 2012, The William Penn Foundation Delaware River Initiative has funded $140 million to 130 organizations to support collaborative grassroots conservation to clean up the river – an important drinking water source for local low-income communities – and restore wildlife habitats along streams and the river. As a result, Atlantic sturgeon populations are bouncing back from historic lows.

Conservation You Can Taste

Whether it be preserving the remaining Black Sphinx date trees in Metro Phoenix, stewarding Native seeds of the Southwest, raising awareness and taking action to halt the demise of pollinators who perform eco-services for $30 billion worth of food crops, or the revival of heirloom grains, Gary Nabhan is not merely a dispassionate reporter of these endeavors, but often a catalyst and an active participant who brings diverse constituencies together in what he refers to as “conservation you can taste. His decades long efforts to coalesce disparate groups to restore working landscapes has focused on revealing common ground and fulfilling the ambitions of scientists, environmentalists, farmers and ranchers alike. These are not just one-off projects for Gary, but rather the tapestry of his life’s work.

In this book, he celebrates the local heroes who labor on the frontlines of food species extinction, cultural restoration and community empowerment. The lessons learned are that success comes from community-based collaboration, turning adversaries into partners, and finding an alternative to the failed approach of top down environmentalism. Regulations and policies need a more inclusive approach to decision making “to stitch together our damaged landscapes.” Nabhan advocates for a humbler approach, admitting that we may not have all the answers, and shifting the driving force of environmentalism from guilt to the “reverence of restoration.”

Gary Paul Nabhan has been a hugely influential food writer; books like Enduring Seeds and Coming Home to Eat are ethnobotany masterpieces. His writings, teaching and activism have helped raise awareness of the environmental and cultural degradation of industrial agriculture and have cultivated a renewed appreciation and celebration for the elegance and importance of the relationships among land, water, soil, plants, people, animals and the cultural continuity of place.

In Food from the Radical Center, Gary Paul Nabhan provides a number of rich and detailed accounts from across the country illustrating that, in a world of ecological and social crisis, ideological differences can be put aside to work together for the common good around basic human needs – clean air and water, biodiversity, food security and community.

Learn more! Read an excerpt from Food from the Radical Center here.