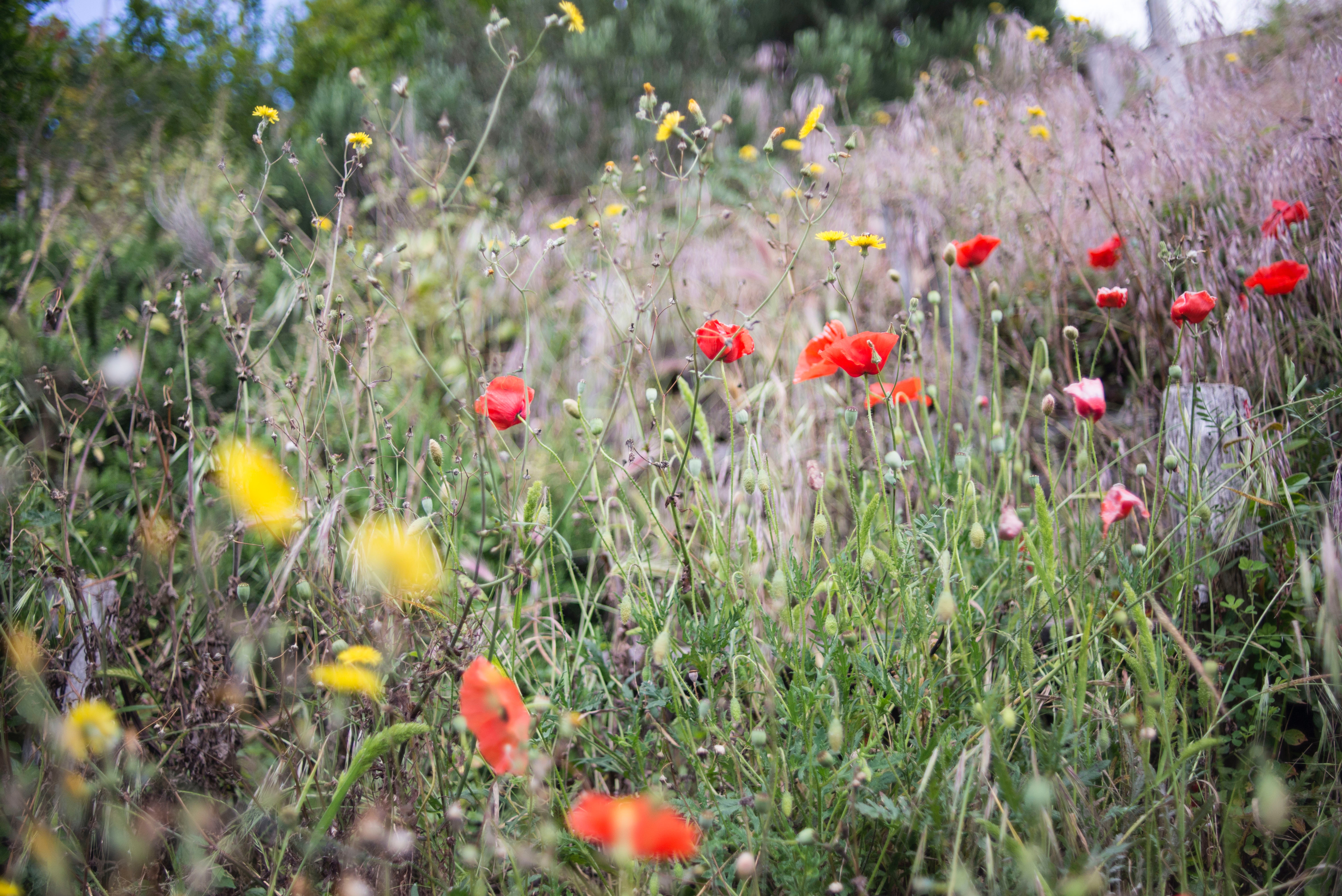 In Food from the Radical Center (Island Press, 2018), Gary Nabhan tells the stories of diverse communities who are getting their hands dirty and bringing back North America’s unique fare: bison, sturgeon, camas lilies, ancient grains, turkeys, and more. These efforts have united people from the left and right, rural and urban, faith-based and science-based, in game-changing collaborations. Their successes are extraordinary by any measure, whether economic, ecological, or social. In fact, the restoration of land and rare species has provided—dollar for dollar—one of the best returns on investment of any conservation initiative.

As a leading thinker and seasoned practitioner in biocultural conservation, Nabhan offers a truly unique perspective on the movement. He draws on 50 years of work with community-based projects around the nation, from the desert Southwest to the low country of the Southeast. Yet Nabhan’s most enduring legacy may be his message of hope: a vision of a new environmentalism that is just and inclusive, allowing former adversaries to commune over delicious foods. 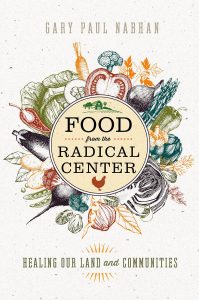 Have you ever been hiking and stopped in your tracks to gaze at wildflowers so vibrant and abundant that you couldn’t keep your eyes off of them? Did their delicate petals bring out the color in other lives found around you—the deer, the seed-eating sparrows, the other hikers making their way along the trail?

And was it just their beauty or also their scent—exuded for bees and butterflies—that told you that one day you too might taste this sweetness?

In late May 2017, ethnobotanist Joyce LeCompte offered me an opportunity to see such a sight and take a deep whiff of such a delectable fragrance. We hightailed it out of Seattle early one morning to rendezvous with others at the Glacial Heritage Reserve in the South Puget Sound area of western Washington.

There, the native plant in lavish bloom was the blue camas lily—Camassia quamash—the signature flower of wet prairie meadows in the Pacific Northwest. That spring, camas seemed to be blooming and blanketing the entire meadow in every direction we turned.

As far as our eyes could see, their six-petaled flowers added hues of pale lilac, violet blue, and deep purple to the vivid greens and subtle tans of the open prairie.

If you happened to arrive at the reserve unfamiliar with the restoration project happening there, you could easily assume that it was first and foremost about the restoration of beauty. After all, who could object to preserving the jaw-dropping, heart-pounding natural beauty of this world we live in?

The beauty of camas lilies was not ignored by previous generations of both residents in and travelers to western Washington. As early as the 1850s, camas lily bulbs were being dug up and shipped everywhere from the Atlantic seaboard to England to grace ornamental gardens.

But don’t get me wrong; this camas lily is not just another pretty face to be sent off to Some Place Else. Its ultimate value may lie in its ability to combat adult-onset diabetes among the indigenous peoples of the Pacific Northwest. The complex carbohydrates in camas roots slow the digestion and absorption of glucose, flattening blood sugar levels and potentially reducing stress on the pancreas.

In addition to being a traditional food of great significance to First Nations communities along the Pacific North Rim, it may be a key factor in their future health. More than twenty indigenous cultures in western Canada and the US still tend, collect, clean, and pit-roast its bulbs for special seasonal events. Many of these communities hope that camas can help keep their children free of diabetes.

Of course, some of these intertribal “root festivals” have been taking place for centuries and millennia. But now, the bulbs are being dried and stored for families to eat year-round as one more means to deal with nutrition-related diseases.

Camas is just one of those “cultural keystone plants” that is both deeply intertwined with both indigenous health and the environmental health of the wet prairies. Thus the restoration of camas in wet prairies is linked to the restoration of human health for native communities who live in or near those landscapes.

And that is exactly why Joyce LeCompte of the University of Washington wrote an incubator grant to the Center for Creative Conservation: to bring together amazing women with diverse skills—Frederica Bowcutt (botany), Taylor Goforth (environmental communications), Valerie Segrest (native nutrition), and Sarah Hamman (restoration ecology). Their own goal was to provide technical as well as social support to leaders interested in camas that are emerging in Coastal Salish tribal communities.

The multicultural team set out to restore this landscape with the appreciation that indigenous knowledge, stewardship, and use of these plants matter deeply to neighboring communities.

I doubt that it has escaped your notice, but historically, most “environmental remediation” projects were dominated by men—albeit well-intended men—who inadvertently practiced a top-down management style that echoed the military as a whole and the Army Corps of Engineers in particular.

Under the auspices of “improving the environment” to control floods and stream flow, the Army Corps drained marshes and wet meadows while planting shrubs for game birds and to stabilize soil. That’s exactly what plants like camas lilies do not need.

Few of these environmental engineers were even aware that local women were continuing to take their families out to harvest camas in places like the South Sound Prairies. As shrubs and Douglas firs moved in, camas lilies began to fade away, and harvesting became less frequent.

To reverse historic declines in camas and their traditional uses, Joyce and the other women who cohosted me have formed a multicultural “community of practice” for the edible plants and healing herbs of the South Sound Prairie.

I was heartened to see that these restoration and recovery efforts now involve dozens of indigenous harvesters, healers, and herbalists as well as land managers, botanists, wildlife biologists, fire ecologists, nutritional scientists, and ethnobotanical educators. They exemplify a trend that even the higher-ups in the US Forest Services now embrace: that diverse membership in scientific communities fosters innovation and problem-solving more effectively than communities with a narrow range of knowledge, skills, and experience.

In fact, many of the practitioners are women with a set of technical and experiential skills that ethnobotanist Kay Fowler calls “plant wifery.” Elsewhere in the Pacific Northwest, ethnobotanist Madrona Murphy might be considered one of those “midwives.” As she herself has documented, “Tribes cultivated [camas] in large gardens, subdivided into family-owned plots passed down through the generations. These were fertilized with seaweed, cleared of weeds and stones, and burned to control brush and grass.”

Building on these ancient practices, the women in Joyce’s entourage have initiated what they call “the Camas Prairie Cultural Ecosystems Incubator.” They are like traditional midwives who use plants to help “bring out of the incubator” and into full light fresh ways of engaging with other people and with the land.

Together they have crafted a stunning vision statement: “Drawing on western and indigenous ways of knowing, this project will foster the health of Salish Sea prairies and the wellbeing of people connected to them, through collaborative partnerships based in trust, reciprocity, and respect.”

As I watched this incubator team put their values into practice at the Glacial Heritage Reserve, I sensed that the women involved are first and foremost attentive to camas itself. They teach others that there is a culturally appropriate time to gather camas lily bulbs—when the lower half of the blossoms have begun to fade.

Some First Nations communities stay alert to when it is time to sustainably harvest the bulbs by what they call the “Camas Moon.” They then begin to employ particular tools and techniques for gathering camas—ones that the “plant midwife” team demonstrated with their own digging sticks during our field trip.

When the digging is done properly, the bulbs pop out of the wet soil almost on their own. Historically, a knowledgeable camas digger could harvest as much as a bushel of bulbs a day from a gathering site of a half -acre to an acre.

As some of these Coastal Salish restorationists already know, a traditionally managed gathering site should be cared for by clearing competing woody growth by hand or by burning, by replanting smaller bulbs, and by ensuring seasonal sheet flow of water across the site. They draw upon historic evidence that camas were grown by their ancestors in well- defined, meticulously cultivated populations that they tilled with digging sticks, hoed for weed control, and enhanced with bulbs they had collected from other nearby camas populations.

Patrick Dunn—the program director with the Center for Natural Lands Management—fully sanctions the use of these historic techniques and management strategies to bring camas back to their former abundance in the Glacial Heritage Natural Area. There, initial efforts have focused on reintroducing fire and engaging volunteers to thin invasive Douglas firs, which had grown up in the prairie during decades of fire suppression.

This particular restoration effort by the incubator team also has a social justice component. The program gets many of its native plants and seeds from inmates involved in the Sustainable Prisons Project, both reducing costs and building healthy relationships.

To be sure, the Camas Prairie Cultural Ecosystems Incubator team is also committed to human goals; they teach First Nations youth about the healing power and nutritional value of camas. A week after my visit to the camas prairie with Joyce, Sarah, Taylor, and Frederica, they hosted sixty tribal members from nine different tribes for both bulb harvesting and storytelling.

The community is now drawing on both traditional knowledge and Western scientific knowledge to tend camas and restore the land. But unlike in many cases, Western science is not privileged over local, indigenous ways of understanding. Both were welcomed. Even the divide between human and nonhuman nature has shifted.

In the welcoming space that the incubator team provided, some of the participants opened themselves up to different perspectives about plants and people. Is camas not “just” a plant but a sentient being and cultural ally as well? Are the traditional practices of harvesting camas merely “consumptive” or are they “regenerative”? Is wild plant restoration a “scientific management operation” or a “lifelong practice”?

Only when trust is gradually and respectfully built among cultures can such questions be fully explored and the challenges of collaborative conservation be fully addressed. And that is exactly what the Camas Prairie Cultural Ecosystems Incubator team of women has wisely and patiently chosen to foster.

From Food from the Radical Center: Healing Our Land and Communities by Gary Nabhan. Copyright © 2018. Reproduced by permission of Island Press, Washington, D.C.