Redesigning the Food System for Health, Inclusion and Climate Resilience 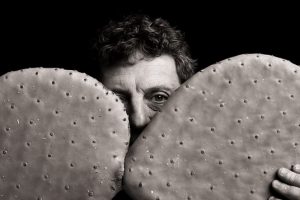 ARTY MANGAN: Gary, what kind of impacts do you think climate change is having on agriculture today?

GARY PAUL NABHAN: We are already seeing many conventional crops hit their thresholds of heat tolerance and salt tolerance. We’re seeing longer and more frequent droughts than ever before, and these are affecting not only crops but also all the wild creatures that flow into fields because there’s nothing for them to eat out in wildlands. We are already beginning to see trends that, I believe, will, in our lifetimes, change agriculture to the extent that future agriculture will look nothing like what we know it as today, so climate change is disrupting, damaging and in many ways completely undermining the current way we farm.

It’s been clear that conventional agriculture has been dysfunctional for a number of decades, and at one level we’re going to see a complete breakdown or collapse of that conventional agriculture. At another level, I’m hopeful because I think many of the solutions that have been waiting in the bullpen, so to speak, will be employed and evaluated in many different ways by many different people and adapted to the particularities of the hyper-local.

ARTY: Where should look to find the knowledge we need to adapt to the unprecedented challenges posed by climate change?

GARY: We have to go back to our roots and back to the roots of what agriculture was like in other cultures and at other points in time, not to culturally appropriate what we see in other cultures but to use the concept of biomimicry as a lens through which to look at what has been possible and plausible and practical in other climates and in other times (especially drier ones for us here in the Southwest). That’s the base that we can build on, so we’re not starting from scratch. We have diverse cultures and problem-solvers all around the world who’ve been thinking and reflecting on and experimenting with components of solutions, and now it’s time to design the entirety of food systems so that they can deal with multiple problems at the same time. It can’t be a piecemeal approach anymore. To just cite one example of that: I’m working with my dear friend Patricia Colunga on the role of succulents in agriculture—agaves and prickly pear and many other cam plants [crassulacean acid metabolism] that have tolerance to all the types of stresses that we’re facing. Pat has a beautiful phrase that I love, “Our future is ancestral.”

ARTY: In a conversation I had with ethnobotanist and farmer Miguel Santistevan about traditional agriculture in New Mexico, he said that in the Española Valley, farmers would look up to the Southern Rockies. If they saw that there was a heavy snowpack, that would determine that they would grow crops that year that need a lot of water, such as corn, which can be stored for a number of years, and squash, which could be stored for a number of months. If it was a meager snowpack, they would grow more drought-tolerant crops such as lentils and garbanzo beans, which also could be stored for a number of years. In that way, they ensured food security based on the changing conditions of nature year-to-year.

That’s a very different approach than agriculture driven by a market-based economy, which says that no matter what the conditions are, you will grow what the market demands. Do you think we will have to change agriculture from a strictly market-based approach to a more ecological approach?

GARY: That’s a great conversation that you and Miguel had. One thing that it highlights is that Traditional Ecological Knowledge can be used in a prescriptive or diagnostic way. In other words, the real beauty of what Miguel has absorbed from his forefathers and ancestors is a working framework that endures beyond the short-term gains of the market economy. Most traditional agricultural systems evolved incrementally, iteratively, over many years. The principles are embedded in them, but only a small handful of the practitioners, such as Miguel and one of our mutual mentors, Estevan Arrellano could really articulate those principles.

Now our climate has shifted so dramatically that we can’t rely on the specific material touchstones of the old systems. We have to look more deeply at their deeper underlying principles, and we have to design food systems for three things that we’ve never intentionally designed them for in the past. One is land health and resilience (and by land, I mean land and water and the soil microbiome). The second is human health and our resistance against diseases of oxidative stress, including diabetes, that are plaguing just about every region in the arid and semi-arid zones of this planet. And the third is inclusive human well-being, which means that if we have high-yielding crops that are nutritious, we’ve still failed if we haven’t raised up the poor in our communities, reduced the disparities, created a food democracy where everyone has a role and a say in what happens, and created livelihoods in the devastated rural and Indigenous communities from coast to coast. Most agricultural planning has gone only towards getting high-yield crops on a minimum input and has never addressed these larger health and community well-being issues.

Our health centers deal with human health but seldom have they reached into the deeper well-being of the whole community let alone issues of agricultural ecology. Our community development activists might be very good at organizing a food democracy but may not know how agroecosystems work or how our human gut microbiome works. So, we need to design holistic future agriculture and food systems that simultaneously deal with those three fundamental needs of humans: to live in a healthy place, to have a healthy body, and to interact with others in a healthy community.

ARTY: Would you give an example of some of your projects that work toward those goals?

GARY: In Arizona, we’re building on the designation of Tucson as the first “city of food cultures” in the U.S. honored by UNESCO. Using the unique wild foods and desert-adapted heirlooms that have been part of a multi-cultural patrimony for decades­–not the ones that belong to a particular tribe or immigrant group–we’ve seen 150 new healthy food products from these wild native plants and desert heirlooms emerge out of 50 new micro-enterprises since we got this designation.

In the foodshed surrounding Tucson, we’re taking a step back from just dealing with sustainable agriculture in a vacuum to restoring the soils of our tributary watersheds of the bi-national Santa Cruz River. We’re doing land restoration both on rangelands and farmlands, including planting hedgerows for pollinators and native plants, especially legumes, that renew soil health and attract nitrogen-fixing bacteria and mycorrhizae. By doing that, we’ve created about 70 new jobs in the last eight years in the very little town of Patagonia, Arizona. 136 youth have been involved in a five-week summer program called Earth Care Youth Corps, and about 35 people are working year-round in these projects, which are a major source of new livelihoods in an impoverished community of 800. Those livelihoods remind even the most conservative people in a rural community that our only option isn’t extractive economies such as mining or natural gas, or other exploitative activities; regenerative agricultural rangeland use and eco-tourism generate more jobs than they destroy.

ARTY: Are there state and federal policies you would you like to see implemented that could help support this kind of work?

GARY: I’m really concerned about who wins and loses with climate change. In most states, we still have institutional racism. I’m not talking about calling any political leader a racist. I’m talking about embedded structural racism in our agricultural institutions. Even the federal government has admitted that there are more vestiges of structural racism in our agricultural institutions than anywhere else. For example, in Arizona, we’ve never had a Native American, a Hispanic American, an African American, or an Asian American on the board of our state agricultural commission after 110 years. And yet the primary demographic of farmers and ranchers in Arizona now is Indigenous women. Arizona is second of all states in the number of women farmers when we count Navajo women who do sheep herding and gardening. We’ve never provided opportunities for them. They were denied loans because they don’t own their land. They’re farming and herding on collective lands.

We have to provide resources for them because immigrants and the Native peoples in our country have a wealth of knowledge and skills and talents to help contribute to this redesigning of our agricultural system we so desperately need. If all the money is still going to the status quo conventional farmers who haven’t innovated in decades, we all lose. The elderly white farmers lose out too because we will all need those innovations to have a healthy food system.