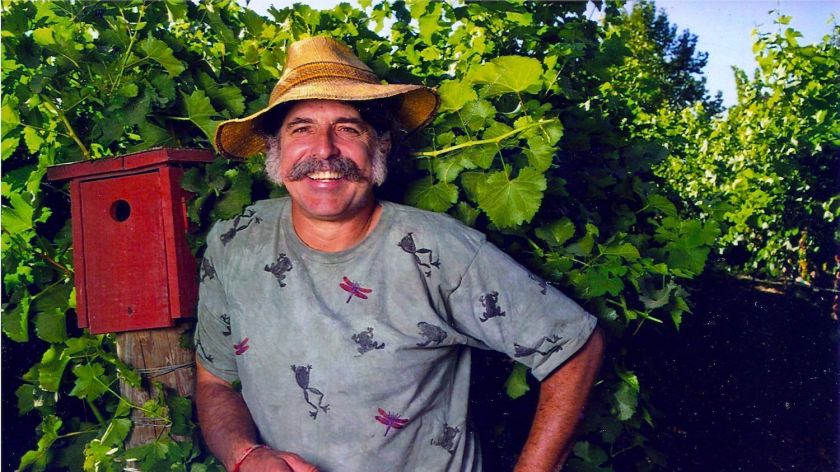 The last time I saw Amigo Bob Cantisano was January 2019 at the Eco Farm Conference. His once imposing physical presence had grown frail from a 7-year battle with cancer, but his spirit remained big and bright. He talked about a drought resistant strawberry variety and how Kate Wolf, the iconic folk singer of the 1970’s and 80s, showed him the inspiration for her song the Lilac and the Apple Tree.

The old abandoned apple tree of the song led Bob to discover the lost botanical treasure of the Sierra foothills. 151 years ago, Felix Gillet emigrated from France to Nevada City, CA and imported agricultural and ornamental plants from 40 countries. He operated a nursery and bred and propagated hundreds of varieties of plants and became known as the Godfather of West Coast perennial agriculture. Most of the nuts, fruits, grapes, and berries that are commonly grown in the US today can be traced back to Gillet’s efforts. But the remains of his work were almost lost. Over the years, Bob and his cohort discovered unknown varieties of hundred-year-old fruit and nut trees in wooded areas and abandoned orchards–some 200 sites–took cuttings and have made them available through the Felix Gillet Institute founded by Amigo Bob and his wife Jennifer Bliss.

As I was leaving Bob, I kissed his hand and he said, “I hope to see you again.” Not a casual comment from someone who knew his days were running short. He died on December 26, 2020.

Amigo’s life was a series of firsts that were not only personal breakthroughs, but also widened the field of learning and opportunity for anyone interested in organic agriculture.

In 1970, as a 19-year neophyte organic gardener attending the First Earth Day Celebration, Amigo heard a talk about the hazards of pesticides, which sparked a deep interest in food. He started a food buying club with his friends in Truckee, CA that evolved into the first natural foods coop in the area. Seeking out and buying from the small number of organic growers in his region and beyond made him realize that he wanted to be a farmer. The coop eventually developed into a distribution company which, after Bob left, was the forerunner to United Natural Foods, today  a $20 billion distribution company.

At one point, Amigo rented a 15-acre walnut orchard and went to the local ag extension agent for advice. The agent “brainwashed” Amigo into believing that it was impossible to grow walnuts commercially without using harsh chemical sprays. The advice went against Amigo’s organic instincts, but he wasn’t sure what to do. One day, unannounced–in what Bob described as a “miracle”–Bill Barnett from the University of California showed up at the orchard. Bill was in the process of writing an Integrated Pest Management Manual and needed an orchard that wasn’t sprayed. They found a number of beneficial insects in Amigo’s orchard and began a trial. The trial was a success resulting in an abundant walnut harvest without using any chemical sprays. Amigo’s orchard became a university biological pest control test site where they introduced a wasp from Iran that preyed on aphids, a serious pest problem for walnut growers. Introduction of the wasp effectively controlled the aphid problem without chemical sprays and as result UC researchers spread the wasp in other areas and in four years it eliminated the walnut aphid problem.

Amigo Bob was a founding member of CCOF (California Certified Organic Farmers) in 1973. Prior to national organic standards when each state had a different standard (and some states had no standard), CCOF was the gold standard for organic certification.

Frustrated with the lack of availability of organic inputs, he ordered a boxcar of rock phosphate with borrowed money. 1600 50-pound bags had to be unloaded by hand. With the hundreds of extra bags of rock phosphate that he didn’t need for his farm, he started Peaceful Valley Farm Supply.

More and more, his time was taken up answering questions from desperate new organic farmers about problems they were having in the field. He ultimately sold the supply business and went into consulting. Initially he was the only organic farming consultant in California, perhaps in the country. His influence grew; his clients farm 90,000 acres or organic and transitioning to organic crops.

Perhaps his biggest legacy is as founder of the EcoFarm Conference. Started in 1980 as a meeting of 60 organic farmer comrades, it has grown to a gathering of celebration and education of over 1800 farmers, gardeners, food producers, consumers and aspiring farmers–the largest organic farming conference in the western states.

Bob continued farming on his 11-acre farm, Heaven and Earth on the San Juan Ridge of the Sierra Nevada growing a diverse mix of fruits and vegetables and teaching apprentices how to farm organically.

As an example of how farming organically changes a farmer’s perspective, Amigo once told me about a time when he was standing in a field of a farmer who was transitioning to organic. The farmer, who once thought only of what life-destroying chemical he would spray next, had awakened to life, excited about the eagle circling above his land.

Aldo Leopold wrote in A Sand County Almanac, “Land, then, is not merely soil; it is the fountain of energy flowing through a circuit of soils, plants, and animals. Food chains are the living channels which conduct energy upward; death and decay return it to the soil.”

Amigo Bob Cantisano understood those truths and worked towards an agrarian system that embodied them in the consciousness and the footprints of farmers.

Even in his death, Amigo continues to be a pioneer. His body will be composted in one of the world’s first human composting facilities, reminding us that, ultimately, we all will become compost. As Amigo Bob Cantisano returns back to the earth, his DNA will carry the fertile stories of hundreds of farms whose land was better cared for, more respected and more alive thanks to his tireless dedication to and his depth of empirical knowledge of organic farming.

To the almost lost fruit trees of the Sierra foothills and their descendants scattered around the country, he is a heroic ancestor who rescued their noble lineage from oblivion.

To the tens of thousands of organic farmers who once worked in lonely fields, he was the leader who gathered kindred spirits from all directions and started a movement that made them smarter, more enriched, and more skilled.

His leadership filled in the gaps in a fledgling organic movement and he remained committed and vital to that movement for 50 years. He touched many lives and healed the land.