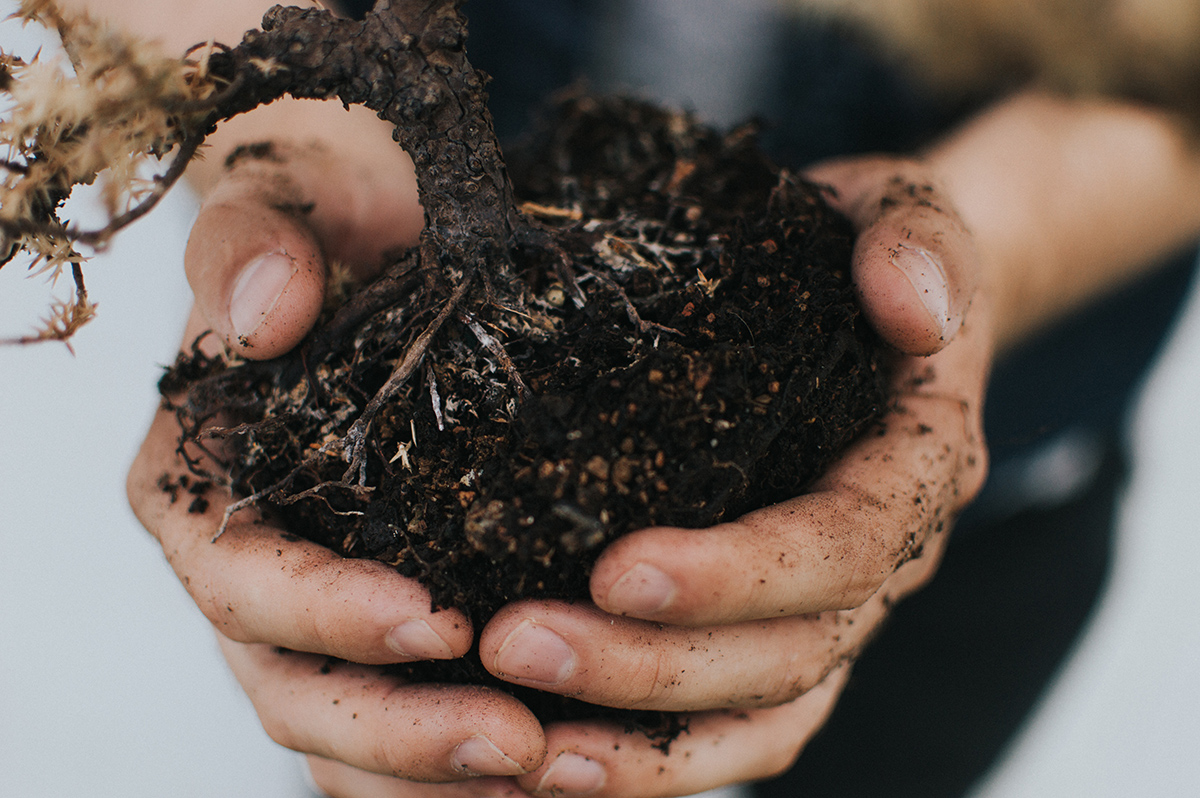 “Our soils have a carbon debt; the atmosphere is gushing with carbon. The carbon over our heads is literally in the wrong place.” Rebeca Burgess of Fibershed

Most terrestrial life is dependent on a thin layer of topsoil where our food is grown and where the plant kingdom converts carbon dioxide into life sustaining oxygen. It takes a millennium for nature to produce 1.2 inches of topsoil, the zone where most of the nutrients and biological activity reside. Maria-Helena Semedo of the UN’s Food and Agriculture Organization says that if the current rates of degradation and erosion continue we may only have sixty years of topsoil left. With the possibility of so few harvests remaining, the threat of global food insecurity is a serious concern.

The concurrent climate crisis is in need of real solutions, not to just reduce the increasing damage of ongoing greenhouse gas emissions, but, perhaps even more importantly, to reduce the amount of carbon that permeates the atmosphere.

Carbon is the common element in both crises. In soil there is a deficiency and in the atmosphere an excess. As Rebecca Burgess, Executive Director and Founder of Fibershed, says, “The carbon over our heads is literally in the wrong place.” Carbon is an essential component and building block of healthy soil and soil is a potential superstar when it comes to mitigating climate change.

Carbon Can be the Solution Instead of the Problem

Tim LaSalle, co-founder of the Center for Regenerative Agriculture at California State University at Chico, has been an early proponent of the power of soil to draw CO² from the atmosphere and sequester it in the soil where it provides multiple agricultural benefits.

At a Bioneers on-farm field day, LaSalle talked about the relationship between the mismanagement of soil and climate, “We have no experience of trying to live on a planet of 350 parts per million (ppm) CO² in the last 400,000 years. There’s been nothing that says this kind of lifestyle, food production, water cycling, weather disturbances will work except below 300 ppm. That’s why in any organizations I work with, I would promote and work towards 280 ppm or less.

“Within a year or two, we really have to turn the trajectory of our climate pathway around, and that doesn’t mean just reducing emissions. As a matter of fact, if we stopped emitting today, the planet would continue to warm beyond habitability. We have to draw down carbon out of the atmosphere.

“If you look at the amount of greenhouse gasses that industry has emitted, it doesn’t add up to what we’ve lost in carbon from our soils. 10,000 years ago when agriculture began, we started to clear forests, disturb grasslands, and eventually invented this thing called a plow that disturbs the soil and releases carbon into the atmosphere. From a legacy level, there’s more carbon in the atmosphere from our soils than there is from our fossil fuels.

“Look up and down the fields in California, in the Midwest, in the East and in the South of this country. When we plow and disc, we lose soil and we lose carbon because carbon dioxide is emitted into the atmosphere every time the soil is turned over.”

Carbon makes up approximately 50% of soil organic matter (SOM). Regenerative farmers are placing a focus on increasing SOM because it increases the soil’s capacity to hold water, making it more drought resilient and reducing erosion. SOM is the basis for a healthy soil structure that creates an environment for beneficial soil microbes to thrive and support fertility. As soils are farmed in ways that optimize carbon sequestration, SOM can play an important role in keeping excessive carbon out of the atmosphere.

Raising livestock holistically on 10,000 acres of California coastal prairie, Doniga Markegard is focused on carbon. “It’s all about the carbon cycle. You want more roots, more carbon stored, less carbon in the atmosphere. Each 1% increase in soil organic matter holds 20,000 gallons more water per acre. That’s really key because essentially in the last 150 years, prime agricultural soils have lost 30-75% of carbon, which has added billions of tons of CO2 to the atmosphere.”

The UN’s Intergovernmental Panel on Climate Change has found that sequestering atmospheric carbon in agricultural soils and rangelands has the potential to return carbon levels to those prior to the Industrial revolution.

In 2015 France launched the 4 per 1000 program at the COP21 Paris Climate Conference to encourage farmers to increase carbon in their soils by .4% per year. If all farmland, pastures and rangeland worldwide accomplished this increase annually, in a matter of a few decades a significant amount of CO2 could be drawn out of the atmosphere and sequestered in soils, increasing fertility and stabilizing the climate.

In 2008 when LaSalle was CEO of the Rodale Institute, he and Dr. Paul Hepperly studied the carbon sequestration data from the Rodale Organic Farming Systems Trials; they found that Regenerative agricultural practices like no-till, applying compost, growing multispecies cover crops, planting hedgerows, not leaving bare soil, and others increase the soils capacity to sequester carbon.

According to LaSalle, breakthrough research by Dr. David Johnson, a molecular biologist at New Mexico State University (NMSU), has shown how a “healthy soil biome with a fungal dominant community can actually sequester a magnitude greater than what we previously understood was possible, maybe even 10 times as much.” On the NMSU webpage Be Bold Shape the Future, Dr. Johnson writes, “Soils with higher carbon content and larger fungal populations enabled us to double the production in the soil with the same amount of water.”

With higher yields, water conservation, increased resilience to droughts and floods and the power to dial back climate catastrophes, what’s not to like about soil carbon sequestration? But LaSalle points out that there are some skeptics,

“Some people say that the science isn’t peer-reviewed yet. But I am aware of at least three farmers – and I know there are a lot more — who are reporting soil carbon sequestration levels even greater than what Dr. Johnson is showing. Their soil has been tracked, so we have valid affirmation that Dr. Johnson’s test plots in New Mexico are being replicated on-farm at farm-scale right now.

“This is something that scientists should be more inquisitive about, not critical of, and start to replicate trials all over the place in their test plots and with farmers and start to measure the carbon changes. We need this information. We need these practices. We need to start applying them. If we have more to learn, which I know we do, we better get busy.”