Soil Tasting: The Pleasures and Benefits of Healthy Soil 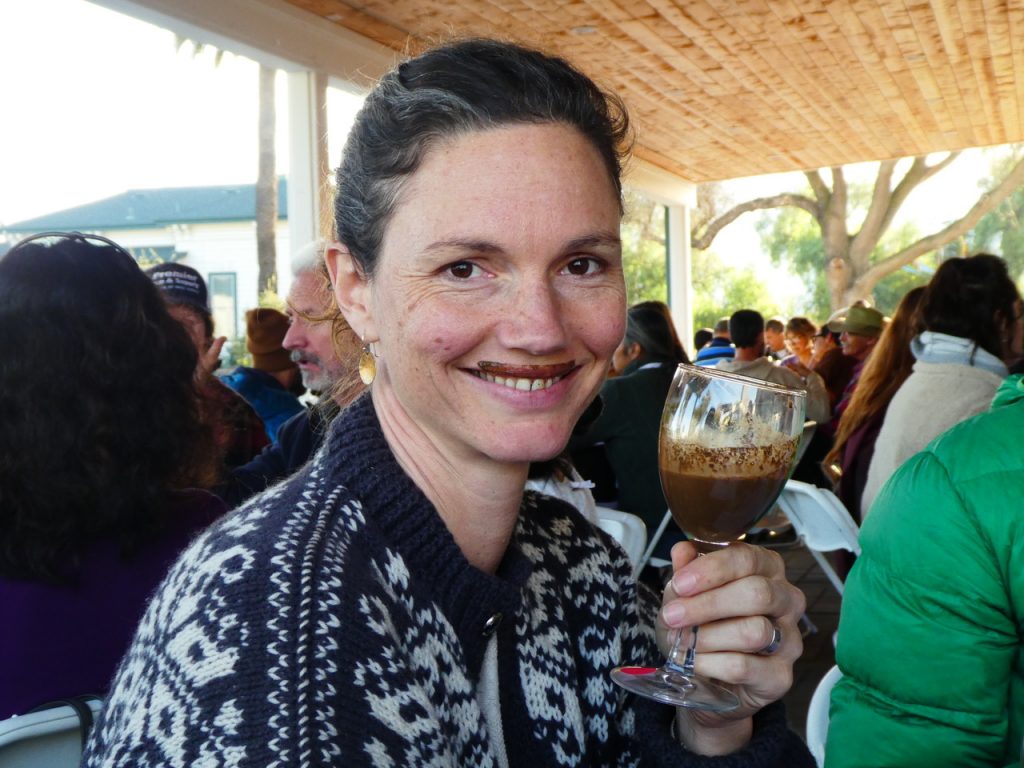 At first it seemed like an elaborate joke–hundreds of wine glasses filled with soil from five different farms elegantly displayed on white linen tablecloths. It must have taken hours to set up.

“They don’t really expect us to eat dirt, do they?” I said out loud to no one in particular.

Initially, a soil tasting had no appeal to me, but then I remembered a scene in the film, The Real Dirt on Farmer John, the outrageous documentary about how John Peterson resurrected his Midwest family farm amidst a failing rural economy by starting an organic CSA.

The scene shows Peterson on his knees in his field licking a handful of soil. I interviewed John and asked him if he could actually taste fertility in the soil. He said, “There was a time when people were trained in that, but I’m not. It’s just a daily routine of mine. It’s an old custom that preceded soil testing and apparently was a way that people evaluated their soil. I couldn’t taste the soil and say that it’s a little short on phosphorus, for example. The aroma that makes fertile soil really distinctive is a result of bacteria. It must go way beyond what happens in a bottle of wine.”

When my mother was pregnant, she told me that she had a craving to eat dirt. Geophagy, eating soil, has a tribal and rural tradition outside of agriculture and is still practiced today among children and pregnant women.

So, with all of that in mind my reluctance to participate in the Taste of Place, which was part of the Regenerative Agricultural Field Day at Paicines Ranch produced by Eco Farm, began to erode.

Artist Laura Parker designed the tasting around the question “How does soil touch our lives and affect our food?” She encouraged people to develop impressions of the soil based on its smell and taste. The earthy smell of soil that is apparent after a rain is known as geosmin, which is a protein produced by bacteria and fungi that indicates healthy soil life. Geosmin is what gives beets an earthy flavor.

To simulate rain and bring out the geosmin to the fullest, we added a small amount of water and stirred the soil in our wine glasses and, like a wine tasting, stuck our noses into the glass for the full effect. From there it became a small step to take a sip and put a morsel of the moist soil in my mouth and roll it around my tongue. Katy Mamen, an environmental consultant, enjoyed the samples with gusto and claimed that one tasted like “a storm or thunder.”

The soil samples, whose colors ranged from dark brown to reddish brown to gray, had distinct aromas and flavors. A silty clay loam had a rich chocolate flavor while a sandy loam was rather bland tasting. After each taste of soil, we sampled food from the California farms where the soil came from- Niseko White Turnip from Phil Foster’s Ranch in Hollister, Rainbow Chard from Fifth Row Farm in Pescadero, Red Cabbage from the Chico State University Farm, grass from Paicines Ranch pasture, and milk from the Burroughs Family Farm in Balico.

Soil structure and type, fertility, climate, cultural practices and of course geosmin are significant contributing elements of terroir, that distinct flavor characteristic imparted to wine by a specific environment. Crunching on Chico State’s Red Cabbage, I realized that terroir was palpable in these organic vegetables as well.

By some accounts, the concept of terroir originated in Burgundy with the Benedictine and Cistercian monks who, while stewarding the vineyards, observed regional characteristics in the wine and even tasted the soil to help fill out their understanding of terroir.

Earthy aromas and distinct flavors are their own rewards, but their underlying cause, healthy soil, has implications far greater when it comes to our relationship with working landscapes. The health of the soil has profound beneficial effects on the carbon cycle and climate change mitigation, erosion of topsoil, elimination of chemical fertilizers and herbicides, and the health of surrounding ecosystems. And that’s what the Regenerative Agricultural Field Day was all about.

Throughout the day, Ray Archuleta, a soil expert formerly with USDA, and Midwest farmer extraordinaire Gabe Brown shared their brilliant understanding of soil and cultural practices that could revolutionize farming.

They started with the premise that soil health (or lack of it) is a reflection of the farmer’s understanding of their ecosystem and implored farmers to mimic nature with multispecies cover crops whose diverse leaf size and shapes capture sunlight from all angles to maximize photosynthetic carbohydrate production.

The plant kingdom is generous and builds community by sharing some of that food through its root system with symbiotic soil microorganisms that provide ecosystem services to the plant like solubilizing minerals for the plant to uptake in a natural system of nutrient cycling that creates plant pest resistant and a wonderful tasting crop. Why then, Ray and Gabe asked, would you want to plough or add chemicals to destroy all of that life-supporting activity?

“Land,” Aldo Leopold wrote in A Sand County Almanac, “is not merely soil; it is a fountain of energy flowing through a circuit of soils, plants, and animals.” Industrial agriculture has lost all sense of that magical ecological reality. There are more living organisms in the soil than all other life forms above ground. And they are constantly busy cleaning, decomposing, recycling nutrients and functioning in ways that science has yet to understand. They are the dynamic edge of life, the keystone species of evolution and our relationship with soil life is more intimate and essential than we realize.