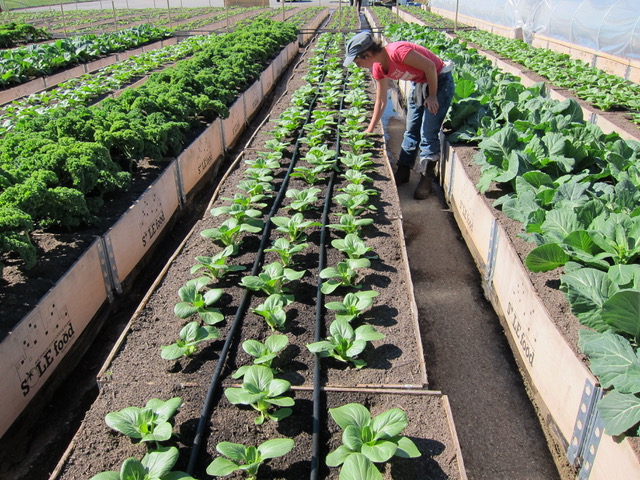 In his poignant and inspiring book, Street Farm: Growing Food, Jobs, and Hope on the Urban Frontier (Chelsea Green Publishing, 2016), Michael Ableman chronicled in words and images the challenges, growth and success of this groundbreaking project, sharing his life-changing experiences as well as those of the residents-turned-farmers whose lives have been touched by Sole Food. It contains a number of moving accounts from residents in the notoriously low-income, drug-blighted neighborhood about how the farm changed their lives.

In this transcribed, edited excerpt from a conversation with Michael, he discussed his experiences with people, the process of creating and sustaining the project, and the agricultural innovations he implemented in the context of the urban environment of a very distressed community. All photos were taken by Michael Ableman.

All photos are from Street Farm: Growing Food, Jobs, and Hope on the Urban Frontier and are copyrighted and cannot be distributed, reproduced, or reused in any way without the explicit permission of the photographer (Michael Ableman).

MICHAEL ABLEMAN: I founded Sole Food Street Farms 14 years. My primary goal was to provide training and meaningful agricultural employment to individuals on the Downtown Eastside of Vancouver, many of whom were dealing with long-term addiction, mental illness, and material poverty. It’s the poorest postal code in Canada, and it encompasses about a 15-square-block area almost entirely inhabited by people dealing with serious drug addiction. The open use of drugs on the streets is a daily norm.

The goal of the project is to give some of these residents a little bit of support and a reason to get out of bed each day, to provide them with an opportunity to join a community of farmers and to grow food, and to give them a sense of purpose and belonging.

When you’re growing food and you work with your hands in the soil, all kinds of amazing things can happen for your mental health. People who work at Sole Food are able to step out of the very stressful, dangerous neighborhood streets and enter these farms where they can do meaningful work in a supportive environment.

We produce a pretty staggering amount of food–30 to 40 tons of food annually on giant parking lots. We designed an innovative system that allows us to both isolate the growing medium from pavement or contaminated soil (which are issues that exist in every city) and to move on short notice (because the value of the land is quite high). We’ve employed a ton of people, and had, I believe, a fairly profound effect on a lot of folks’ lives. I’m not in the business of saving anyone, or even getting them off of drugs; we’re just trying to provide them with a sense of purpose and belonging.

With Sole Food Farms, we tried to do something with agricultural credentials. The 30 tons of food we grow is a respectable agricultural scale, but also the quality of what is grown is high enough that our food is sought after by top chefs, and it’s coming from the labor of people dealing with some pretty heavy shit and very tough lives.

Jesus was a lovely man. You can see in his smile. In spite of the hardships in his life and his personal issues, every time I saw him he had a beautiful smile and something nice to say.

Jesus traveled during the civil war in Guatemala by foot through the US into Canada as a refugee to escape the violence in his home country. Sadly, two years ago, on New Year’s Day, he was the victim of violence. He died in a park at the hands of someone else. I wrote about him in an Op-ed piece that appeared in the Vancouver Sun and other papers because the reportage of his death wrote him off as just another lowlife. That was hard for all of us who knew him, not only because he was a friend, co-worker and elder in the Latino community, but also because the reporting done on people from Vancouver’s Downtown Eastside portray them as less than the rest of us. So, I took that on in a piece I wrote, which was initially rejected. Then after a long conversation with the editor of the paper, it was accepted. I was quite critical of not only that paper, but also many papers and how they depict the murder of someone in that neighborhood versus if that person had been living in a more upscale neighborhood in Vancouver.

There’s a feeling of joy that comes from abundance, especially when it’s been your hands that have helped manifest it. It’s a hard thing to describe unless you’ve experienced creating that abundance through seeds and soil. You are able to stand before your community and say: “Here, this incredible abundance that we’ve created is available for you.”

When I started this project, I came to Sole Food with the same prejudices and preconceptions about the population that I was going to be working with that everybody else has. I’d see people on the streets with needles in their arms, or somebody looking through my car window. You make judgments. We all do. We look the other way or roll our window up, or try to pretend we don’t see it, but as I’ve gotten to know these people on a regular basis over the years, I’ve developed relationships and seen that they are amazing, creative people, and just like us. They want all of the same things we want. They have big hearts and the desire to do something meaningful in the world.

Addiction is a tough situation, and so is poverty. Miranda was somebody who I think was able to pull her life together to some degree. She worked with us early on in the history of Sole Food and left when she became a mother.

It’s one thing to grow vegetables in an urban environment, but when I proposed doing an orchard, people thought I was crazy. And because it is in a very high-profile location, I wasn’t going to be able to hide my mistakes, but I was confident that I could make it happen.

When you plant a tree into a large box of soil that’s above ground, the root systems warm up nicely and there is good drainage, so they really take off. These things looked like 20-year-old trees in two-or-three years; they just grew like crazy.

But what happens when the root system reaches the edges of the boxes? The way I handled it was to maintain a semblance of balance between the tops and the root systems, which means pruning the tops quite heavily. That more or less worked. We had more success with some trees than others. We discovered that when you take a bunch of soil and you separate it from the broader environment of a field, weird things start to happen because you don’t have all the dynamic biological interactions, which we can’t see, that go on in a broader, open, uninterrupted field space.

Biology tends to go downhill in a hurry under those conditions, so we had to learn how to compensate in a significant way. We tried all kinds of interesting things. Worm castings and compost tea are great. It requires a lot more attention than you’d have to pay in a field space. Soil fertility is important as well, but the bigger issue we found was maintaining organic matter and soil biology. At first, everyone thought that we were nuts until we started showing up at doors of restaurants with cases of beautiful persimmons, figs, lemons, cherries, apples, pears, plums, and quinces.

The habitat that this orchard created in a totally paved urban hardscape was remarkable. In the understory of these trees, in every other box, we had culinary herbs, and every bird, insect, creature for miles around showed up because of the amazing, inviting habitat that we’d created.

This is not beginning gardening. This photo demonstrates a highly productive, pretty sophisticated system. It’s a hinged flat box that opens up and slides over the top of a pallet. We had a gazillion of them made, stamped with our name, but the boxes started degrading and delaminating within a year or two. It was a disaster, so we had to replace everything with plastic ones that we had made that will last forever. They’re indestructible, which one could say is not so good, but I think it is good. Forever’s a problem, but if they’re going to continue to be used in farming, it’s great.

I write very honestly about the compromises that we had to make, ecologically, socially, economically, etc., in the book. I am upfront about all the mistakes–and there’s a million of them–that we made in this whole process because I feel that’s much more valuable information for people than just hearing about all the great stuff we did.