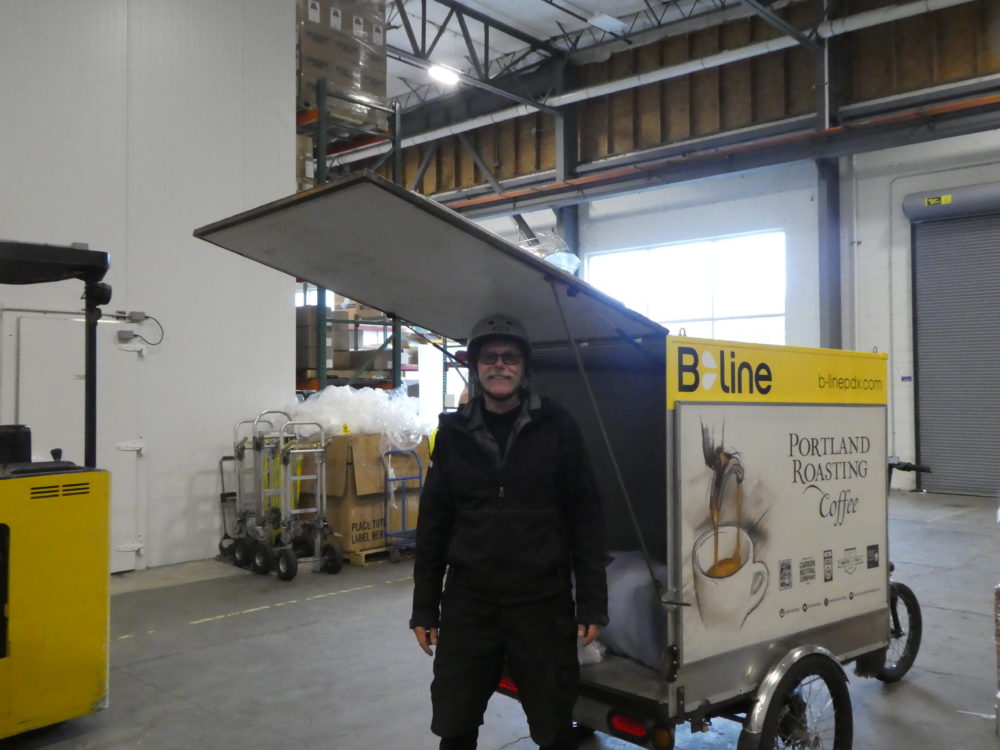 Traveling through Salmon Nation on my way to British Columbia, I stopped in Portland. Unlike the shabby, worn-out, warehouse districts in many cities, Portland’s Central Eastside seems lively and up-and-coming, filled with a variety of light industry serving local needs. Recently several coffee roasting operations, cafes and restaurants have opened up. Part of this entrepreneurial renaissance is The Redd, a food hub on Salmon Street developed by Ecotrust. 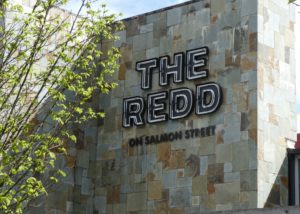 Salmon Nation, whose boundaries are defined as “where ever Pacific Salmon have run,” is a concept conceived by Ecotrust as a way for people to live in meaningful relationship with their ecoregion and to have life-affirming engagement with their neighbors, as is modeled by the lifecycle of salmon. The tagline is “People, fish and our common home.

Elizabeth Woody, Ecotrust’s Director of Indigenous Leadership, in the essay, Simple Customs of Salmon Nation,wrote “Salmon were the first to teach us of wealth… Their die-off generated the most biologically diverse forest on earth. For millions of years, salmon came and left this way. For eons, this monumental Giveaway brought us health and renewal.”

Trying to mimic those qualities of cooperation, renewal, generosity, and health within the contemporary economic system is akin to salmon swimming upstream against the current, nevertheless, Ecotrust is committed to building a restorative, equitable, regional, food system.

Emma Sharer once directed a national supply chain, and worked for a consumer packaged goods company and a granola bar company, but became disillusioned with global food export practices and found herself attracted to the idea of building regional economy. As The Redd’s Operation Manager, she is on a quest to figure out how to get everyone to work together and to identify the intersections that trigger new opportunities.

Ecotrust refurbished an old marble warehouse and redesigned it for mixed use space with shared offices for small to mid-size food companies who are getting started in Portland. There are about 100 small food companies using the warehouse and distribution space, everything from producers of nut butters, salads, seafood, and soup as well as FoodCorps, a national non-profit that provides nutrition education and school garden programming in schools.

B-line Sustainable Urban Delivery, one of the five anchor tenants, manages The Redd facility. Sharer said, “We told B-line, here’s the space, you guys pay us rent and run it. Figure it out and we’ll help you. We come in and play the activator/support role.” B-line distributes locally produced food products throughout the city on fourteen electric trikes. 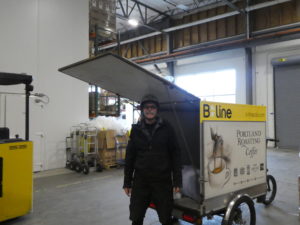 “B-Line,” Sharer said, “has partnered with New Seasons, the biggest food retailer in Oregon, in a program called Green Wheels. Instead of having many small entrepreneurs load their Subarus and deliver them to New Seasons individually, they drop their inventory off here, B-Line aggregates it and distributes product.”

Fourteen patient private investors provided capital for the purchase and renovation of the building. They are willing to accept a slow, steady, modest return on investment as long as their money is having a positive environmental or social impact.

“Using business as a force for good” is an ethos held not only by the investors, but also by the small business owners at The Redd. After working as a psychiatric nurse in Oregon’s prison system, Betsy Langston became interested in Restorative Justice, a process that brings all parties together—victim, offender and community—to promote reconciliation and healing. A percent of Betsy’s Bar None business profits are donated to the Insight Prison Project to help their efforts in healing trauma, preventing violence and repairing broken lives. Emma Sharer used her supply chain expertise to help Betsy source more local ingredients. Now 95% of the ingredients for Betsy’s Bar None products are sourced from North America.

70% of Oregonians who live below the poverty line are women and children. Ground Up, another one of the The Redd’s businesses, is a nut butter company that has a six-to-nine-month program that hires and trains homeless women, providing job skills and building their confidence to help them transition out of homelessness.

The full vision for The Redd includes a second building, an old metal manufacturing plant next door that will be remodeled into be a public event space.

Sharer said that buying both buildings “is a really critical real estate investment because the value of the real estate has doubled in the last three to four years. We could make money and build apartments, but we don’t want to do that; we truly want to be a part of the Central East Side industrial community. How do we bring back the industry that was once here, but recreate it in an equitable, prosperous, regenerative way?”

Amanda Oborne, Ecotrust’s Vice President of Food and Farms, conducted an18-month- Infrastructure Gap Analysis to answer the question: Where could investment catalyze regional food system growth and development? That analysis led to the development of The Redd.

“It’s easy to get overwhelmed,” Oborne said, “with the magnitude of change required to meet the hopes and dreams many of us hold for our food system, but the surest antidote feels like digging in on a practical local solution, and connecting with others doing the same. The Redd is a space that invites and facilitates long-term collaboration by farmers, ranchers, fishers and entrepreneurs who hold a vision for an equitable, restorative food system on one hand, and provides a platform to engage regionally or nationally on the other. It feels both radical and practical, in a way that offers a pathway toward optimism and hope.”