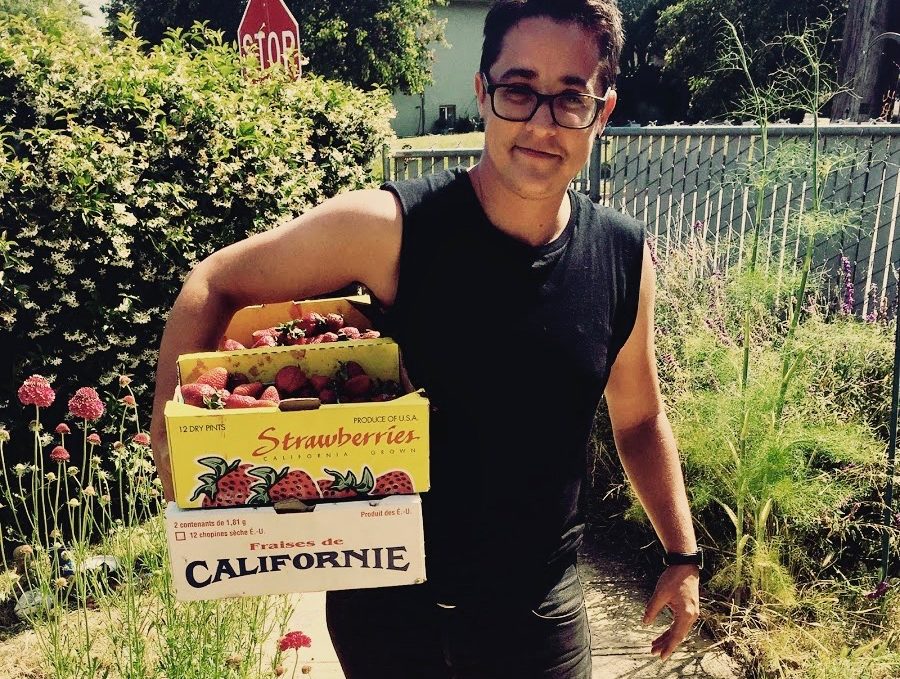 VICTORIA: What has been your journey that brought you to BYA?

JOHNNY: I grew up in the Central Valley in California in Bakersfield. I was around a lot of monocrop agriculture. I had gardens up until I was about 10 years old, but had kind of gotten away from that in my teenage years. When I went to college in San Francisco, I had the opportunity to attend the Bioneers conference on scholarship when I was 19 years old. It was really a pivotal time for me because I was so impressionable coming from Bakersfield–the middle of nowhere–to San Francisco. All of a sudden the world opened up.

Being at the Bioneers Conference reconnected me with agriculture and farming. I started Woofing doing volunteer work on organic farms. From that I started working on farms, and then ran my own farms in the Northwest. I started a farm in Olympia that I rented for a few years, and was also working with a group called Stonewall Youth, a queer youth program. Teen youth from a queer rock camp were coming and working on our farm.

About three years ago, I had gotten to a point where I was feeling socially isolated. I was living in Olympia and having this idyllic dream of being on this beautiful land, on this farm raising my own animals, and being in connection with nature and growing all this food. But I felt disconnected from a larger sense of culture and a larger sense of diversity, and got feeling really dissatisfied there. I wanted to move to the Bay Area to do more social work and advocacy. I thought I was going to have to give up farming to do more social work, but I found a job doing both, doing reentry internships on an urban farm in San Leandro.

I moved back to the Bay to do that. Since then I have been working in farming and education and training as opposed to running my own farms. I have gotten more connected to a diverse group of people and diverse ideas and knowledge. It feels a lot more sustaining to me.

I came to BYA looking for a similar job doing social advocacy and social work within the realm of food justice and gardening and urban farms. It’s amazing. This place is doing really beautiful things with youth.

VICTORIA: As someone who is also from the Central Valley, from Fresno, I definitely agree with being really grounded in that environment, and then all of a sudden kind of jumping into the city and being opened up into a greater world.

JOHNNY: I think growing up in that kind of environment in the Central Valley around industrial farming, and seeing it directly really pushed me into organic and more sustainable agriculture. I was like 10 years old driving a little truck around spraying pesticides, and got to see my stepfather’s farm just collapse because the ground was so desolated. We would chase crop dusters. It was just full-on gnarly industrial farming. Being around that and seeing the impact in a more direct way gave me a lot more of an impetus to do something else, and go towards organic farming. It struck me more because I saw the impact of the opposite of organic.

VICTORIA: What led you to find the opening to bridge the intersectionality between social work and food justice? I think that’s a huge misconception that we are trying to deconstruct for the youth, that there’s not really a place for youth to express their activism and their passions in a way that will sustain their authentic path.

JOHNNY: As I grew up and grew out of my upbringing and learned about all the different things in the world, I started gaining more of an awareness about social injustices, and racism and oppression in a variety of forms. I learned about how food and growing your own food have been systemically stripped from communities of color. That empowerment and that knowledge have been taken away. The younger generation of organic farmers are mostly straight white couples on the land doing their sort of insular thing, and mostly selling to other white families. The racism and the division of diversity is really palpable in the organic farming movement. I got to see that being a young white person participating in that movement. Around the time of the Black Lives Matter movement, I was doing a little bit of organizing around prison systems, and was feeling really disconnected from the social values I had in relation to racial oppression and injustice, and what I was doing and where I was living in Olympia, which is a very white place. Living on the land with white people, farming for white people. I felt I was sort of perpetuating this system that I didn’t believe in.

I wanted to do more work that was geared towards social justice issues, and that was when I thought I was going to have to step away from farming. Being able to find a job doing those two, and continuing to work in that field where I feel like I’m bridging those two worlds feels really important to me because communities of color have such a strong history of working the land and being in conjunction with their own food systems, and I’ve seen that taken away from them in an urban environment.

A lot of the folks I work with say, “Oh yeah, my grandma had a garden.” But their parents didn’t have a garden, and they don’t have a garden, so the historical knowledge has slipped away. As a white person, I gained my knowledge through a lot of white privilege, like being able to go volunteer on farms or work on farms that pay horribly.I really think it’s important to re-disseminate that knowledge back into communities of color to empower people to be able to have connection to land and connection to their own food and their own health and security.

I wanted to go back to a city and back to a diverse population and back to people who don’t have access to this kind of food. There aren’t farmers’ markets right down the road. They don’t have CSAs. I wanted to take those things that I had learned within the organic farming movement and bring them into communities that weren’t just my own.

VICTORIA: I commend you for bridging the gap and working towards a new vision that that grounds itself on equity and justice. I’m curious to hear more about BYA and some of the programs.

JOHNNY: At BYA we work with youth from 14-24. At those ages, I feel like youth are very impressionable and very curious, and are kind of deciding who they’re going to be in the world. To expose them to issues around alternative food movements, food literacy, cooking, growing their own food, taking their JAY-Z off and putting on some boots and moving a bunch of manure around kind of blows their mind.

It’s really amazing, doing education specifically around urban farming and agriculture. The impact it has on people comes quick, unlike other social movements and educational structures that I’ve worked within. You see youth come in stressed. A lot of the times the they come in after school and they’re just amped and crazy. We start talking about pruning, and we make them slow down, and they start looking and asking if this is a fruiting bud or is it a leaf bud? You see the shift happen quickly, it’s really profound.

We also have younger kids, K-5, who are in our afterschool program. They go in the garden and just want to grab everything and touch everything and smell everything, and make games out of every little nook and cranny in the garden. To expose anyone, but specifically youth, to natural spaces and reconnect them with that is really healing and really powerful.

BYA being a community center and having access to the land and the garden, we’re able to provide paid internships to youth to work in green energy jobs and to create a career pathway. It’s hard for youth to think that you can have careers working in sustainable movements or in the social work nonprofit world. So, we try to create career pathways, and point kids in that direction in terms of self-empowerment and actualization.

VICTORIA: Do you have any advice for youth who are curious about exploring this type of path, any encouragement? Any wisdom, any guidance, or any opportunities for youth who want to get involved in the movement.

JOHNNY: First, I want to rep the Bioneers a little bit because that conference was really a big deal for me when I went. I was taking a holistic health class and our teacher got us scholarships for six of us to go. I had never seen anything like that at all. It blew my world open. I got to be in these lecture halls listening to people like Michael Ableman talk about organic farming and sustainable agriculture, and Janine Benyus talk about biomimicry, and Bernice Johnson Regan talk about faith and spirituality in activism. There were just all these different people, and I realized there was this whole movement happening that was so vast, and I had never seen anything like it before. I had sort of dabbled or heard little bits of it, but to see it all in one place just rocked my little 19-year-old brain. It really did open up a lot for me, having that experience. I would never have chosen to go there or been able to afford to go. To be able to go as a teen for free because somebody that wanted to help me knew about it, and just have my world blown open was a really, really profound experience for me. It had a big impact and played a big part in me going in the direction I was going. So definitely Bioneers, awesome!

Advice to kids wanting to be on a similar path is just to constantly learn from people who are different from you is really important.

BYA offers urban agriculture internships. We have four programs throughout the year that are based in seasonal agriculture. They’re structured through the food justice framework. We talk about alternative food movements, health and nutrition, food justice, and food sovereignty. We also work in the garden and grow food for our monthly farm stands. We have a couple of farm stands outside two different churches, a monthly food giveaway where we organize a bunch of food from the food bank and our garden, and people from the community come in and get access to fresh food. The youth get to participate directly in the local food system and get to tangibly witness how their work impacts their community.